Negotiating the Cost of Initiation Ceremony 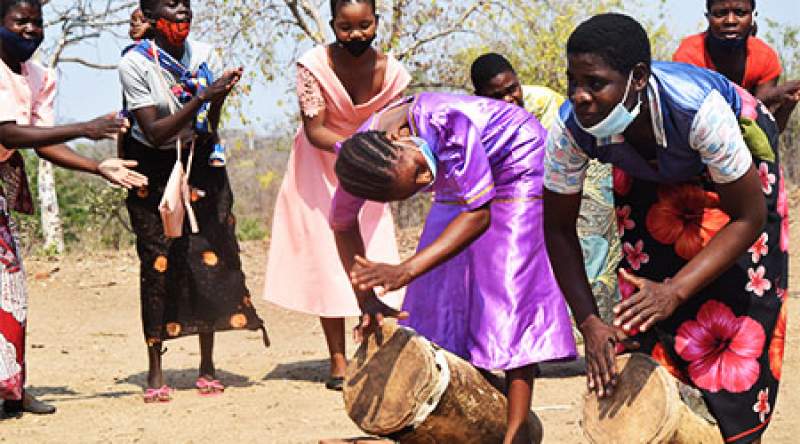 Young people who have not undergone an initiation ceremony in most rural set ups in Malawi face a lot of social humiliation.

Oftentimes they are treated as outcasts by their friends who underwent the tradition.

Angella Kalolo is a teacher there. She has seen the ugly face of the initiation ceremony in her area of Traditional Authority Symon.

“This is a fruit of lessons imparted in them by initiation counsellors. They just want to put those lessons into practice,” she said.

“Since the opening of this school in 2015, twelve learners have fallen pregnant and got married. We managed to bring back to school seven of them,” said Kalolo.

Kalolo has a suggestion.

“I think this whole tradition of initiating young people should completely end,” says the 32-year-old mother of one.

“I was raised here with my mother after my father died. My brother paid for my school fees on condition that I should not under any circumstance go to the initiation camp.

“It happened and here I am today. I completed my education and I am a teacher without undergoing any initiation ceremony. My daughter is in Form one and she will not undergo it,” she added.

He says most of these practices, such as kusasa fumbi, stem from the initiation ceremonies.

Dorothy Odillo who speaks on behalf of Group Village Headman Zalewa in the district, says her area registered about 200 teen pregnancies in 2018 alone.

It is Thursday and the sun is overhead in Patason village.

Members of Chitete Star Circle have gathered at Chitete Primary School in an attempt to discuss and find solutions to issues affecting the young generation.

Dances by women whose voices get mixed with beats from traditional drums paint a high-definition picture of social commitment in bringing down the vices choking child development in the area.

These are the communities in the area of Traditional Authority Symon in Neno who are converging under the Star Circle to solve problems facing the children.

Star Circle is a component of the Securing Children’s Rights through Education and Protection (SCREP) programme being implemented in the district by the Community Action for Sustainable Development Organization (CASDO).

CASDO is implementing the Programme in partnership with Save the Children with financial support from NORAD.

It seeks to contribute to the strengthening of civil society in Malawi to demand quality education with a focus on learning outcomes, inclusion, protection from child marriage and teenage pregnancies, among others.

Members of the Star Circle, after about two hours of deliberating, come up with commitments and solutions to the challenges.

Some have testified interventions they have employed to end the vice since the onset of the Programme.

“We no longer teach harmful lessons to the youth since we started the Star Circle. We were summoned by the social welfare office for teaching the practices that risked lives of our young people,” says Estere Amos, a female counsellor for the initiation ceremony.

She admitted they had been drilling young girls with conjugal tactics that fueled early pregnancies and teen marriages.

“We are now being used as agents of change. Although change is not easy, we are now able to bring back to school teen mothers and ending child marriages, courtesy of SCREP,” she said.

“I have two children myself. None of them has undergone an initiation ceremony but they are growing up so well. No bad spell has ever befallen my family for not sending the children to the initiation camp,” she testifies.

Under the Programme, the communities are now aware of the ills of marrying off their children, as it is said by Peter Langwe, the district’s child protection officer.

“We take to court parents and anyone responsible for teen marriages and early pregnancies.  We registered 71 cases of teen pregnancies last year alone, but this year, we only have 19 cases and we are sure that the figure will not reach the last year’s,” he says.

Langwe added that his office has also been advocating for elimination of harmful lessons during initiation ceremonies, an initiative he says is bearing fruits as evidenced by the decline in teen pregnancies.

Hope for the future

60 percent of the programme goes towards education to ensure that children remain in school.

It also has a component of child protection to reduce child marriages and teen pregnancies while promoting children’s rights.

SCREP Programmes Manager, Tumbikani Kaonga, believes that the programme is the hope for the future of children.

“After we implemented the programme in 2019, communities started opening up and report cases.

“We have seen a rise in cases during the COVID19 pandemic period because more people are now able to report.

“It is our hope and we believe that the cases will significantly go down by the time we phase out the programme in December 2023,” he says.

“We are enhancing the communities to proceed with the interventions afterwards.

“We are working with teachers, social welfare offices, child protection committee and district health officers at district levels. This is for sustainability of the interventions,” says Kaonga.