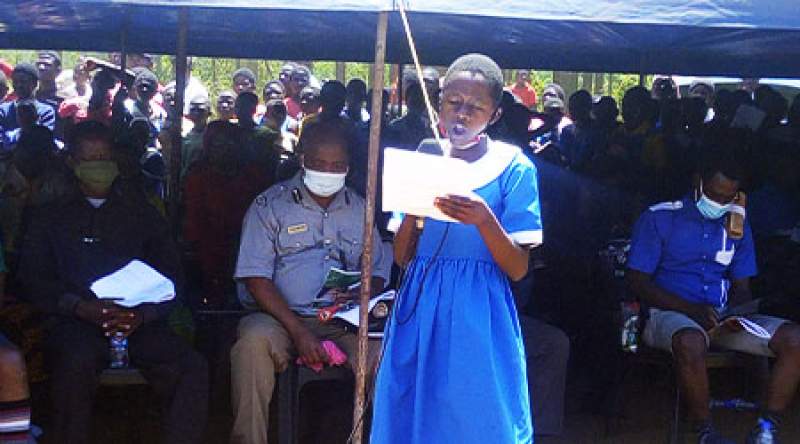 The Day of African Child has been commemorated in Mulanje on September 24, 2021, with a call for joint collaborations in exploring and addressing root causes of violence against children.

Guest of honor at the event Tadala Yesaya who is in Standard Seven at Lauderdale Primary School highlighted a number of social and economic challenges that affect children.

“Forced marriages, defilements, indecent assault, child labour are common abuses here in Mulanje and some children mostly girls have dropped out of school because of these abuses,” said Tadala.

She pleaded with police and courts to protect children by arresting suspected perpetrators of violence against children and giving stiffer punishments to those convicted of abusing children.

District Social Welfare Officer for Mulanje Martha Mkisi told Zodiak Online that poverty is the root cause of most cases of Gender Based Violence which children especially girls suffer and she called for collaboration in addressing this monster-poverty.

“You know we have another issue here in Mulanje, child neglect and I seriously get touched when I hear stories of parents especially fathers that abandon their biological children leaving them in abject poverty. This also has to stop,” said Mkisi.

Vice Chairperson of Mulanje District Council Councilor Fabrics Lipenga said the council using its established district and community structures will continue protecting the rights of children so that they grow into productive citizens.

The Day of African Child has been commemorated every 16th June since 1991 in honor of children who participated in the 1976 Soweto Uprising. It was initiated by the Organization of African Union (OAU) now African Union (AU).

“30 years after the adoption of Charter: accelerate the implementation of Agenda 2040 for an Africa fit for children” is the theme for the 2021 Day of African Child.