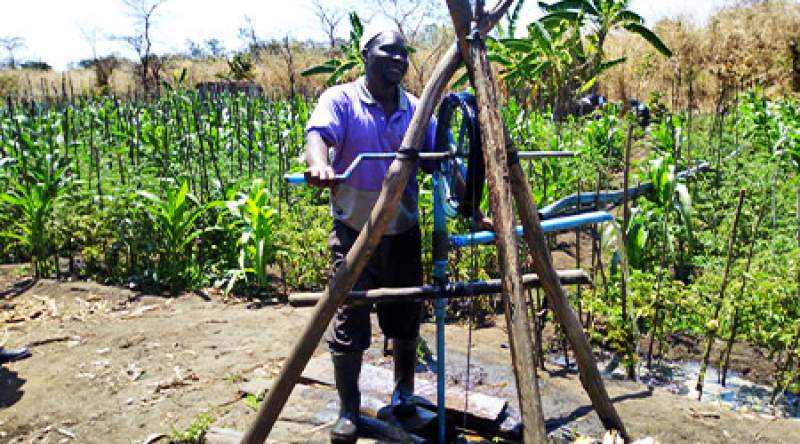 Some small-scale farmers in Mangochi who are practicing irrigation farming using manual methods have recommended the hand water pumps rather than other ways like treadle pumps which are foot-operated.

The farmers said this to journalists during a media tour that was organized by Beyond Water, an organization that is working with rural communities in bringing pump water to small scale farmers and households to appreciate the experience from users.

Richard Uladi from Machemba Village in the area of Traditional Authority Mponda in the district, said since he migrated from a watering-can to ‘Mphwekesa moyo’ a water hand pump which the organization is supplying, things have changed.

Uladi said apart from improving his yield, he also has time to do other things at home, which was not possible before when he was always exhausted after irrigating.

“From this same piece of land, I now harvest about 20 bags of maize, but previously the maximum was 6, when I was using a watering can,” explained Uladi pointing at his maize garden which is almost 1.2 hectares.

He said the other good thing about the pump is that he was offered on credit and has been paying after in instalments after selling his harvests.

Chuma Omali, from the area of Traditional Authority Chimwala who is also using Mpweketsa moyo pump, said he has been using treadle pumps before, but it was time consuming and tiresome to use.

“With these pumps, it took me about two hours to irrigate my half hectare tomato garden and even my children of less than 10 years old, when they are free, they assist me to irrigate the crops as these pumps are very soft and easy to operate,” explained Omali.

Beyond Water District Sales Representative for Mangochi, Joel Phiri, said he is happy that farmers and others who got the pumps for home use are testifying.

“We want to end poverty for good, whether small-scale farmers or household users, so that they should have reliable water sources,” said Phiri.

He said, “for example, the Mphweketsa Moyo small pumps that are used for irrigation are going at seventy thousand Malawi kwacha, farmers are allowed to take them after paying half the price and pay the balance in installments after starting selling their crops like vegetables.”