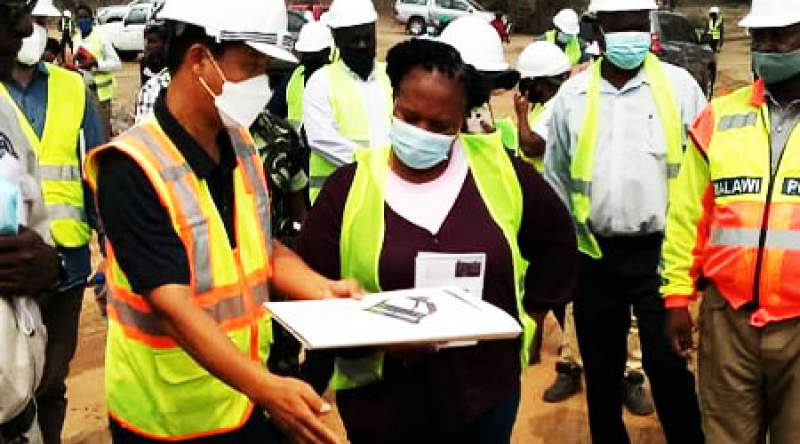 Construction works of the intake and first 6 kilometers of the main canal under the multibillion-kwacha Shire Valley Transformation project, will miss the October 30, 2022 completion deadline, an expert says the works will be completed three or six months later.

Phase one of the project covers 52kms from the Intake at Kapichira Dam to Lengwe.

Chief Inspector, working with a consultant supervising the works, Chitsanzo Kamowatimwa, says the works are at 50.2 percent.

"The works have delayed, Covid 19 affected operations as the site was closed twice and there were also delays in importing some essential materials from abroad due to some restrictions within countries," explained Kamowatimwa.

He spoke Thursday when deputy Minister of Agriculture, Agnes Nkusankhoma visited the project to appreciate progress.

He added, "works of such nature, when a consultant comes on site, they need to review the design according to the situation that is on the ground. The design is done considering certain specifications and then if those conditions are not met, you need to review and if necessary, redesign, so there have been some delays also that have come from the review of the designs.

"So, all these are contributing to some delays that are there and that also might mean extension will be required."

Deputy Minister of Agriculture, Agnes Nkusankhoma, says she is impressed with the progress so far.

"I am very impressed because last time I came these structures we have seen today were not there. We have seen a lot of work which has been done here so I am really impressed and let's hope anytime soon we will start using some of the canals we have seen.

She said the project is "critical in boosting commercial agriculture in the Shire Valley where farmers usually face dry spells which affect their productivity."

Meanwhile construction of the 46kms of the canal will commence in October 2021.

Overall, the first phase is expected be completed by December 2023.

The Intake plus first 6kms of the main canal is being constructed by Conduril Engenharia while Sinohydro will construct main canals 1 and 2 for a distance of 46kms.

The first phase of the Shire Valley Transformation Programme is being funded by the World Bank, Africa Development Bank, the Global Environment Facility, OFID and the Malawi Government to the tune of $223 million.

The programme once completed, will supply over 43,000 hectares of land according to the Engineer.

He further disclosed that the program targets to benefit 223,000 people, in over 48,000 households, with 95,000 people targeted to benefit in the first phase.