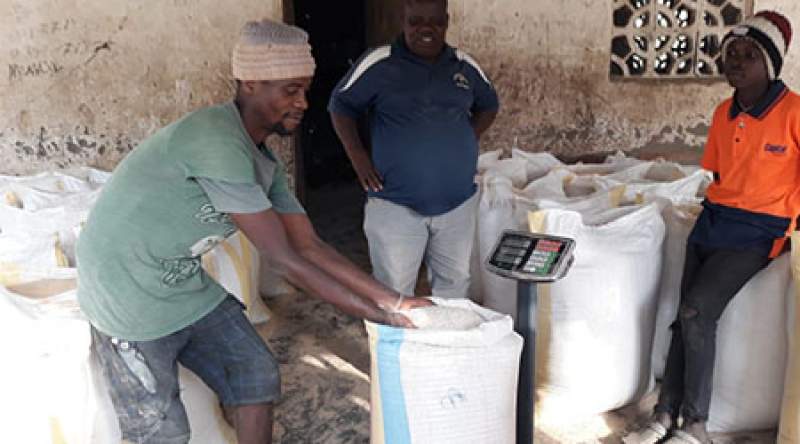 Same farmers who were crying foul over poor markets for different crops when they went solo, are today boasting of better markets for same crops after forming associations and cooperatives.

A random talk with some veteran Soy bean, Cotton and rice farmers in the eastern region sing a similar song of improved market prices than when they individually gave away their crops to vendors.

Brighton Mussa in his 60s has dumped tobacco for Soya bean. He has however been struggling to send his children to school from the meagre sales as the crop ended up in the hands of vendors who had all the controls on the market.

This, according to Mussa, changed for the better in 2014 when they formed an association called Tukamulane.

"We realized better sales of above K200 per kilogram the same crop we sold at less than that individually.

"We had the power to negotiate prices as a group hence we had plenty Soya put together," said Mussa.

This was in collaboration with Malawi Confederation of Chambers of Commerce and Industry (MCCCI) and Centre for Environmental Policy and Advocacy (CEPA) through Farmers Union Malawi (FUM).

The main objectives are aimed at improving agricultural productivity in line with National Agriculture Investment Plan (NAIP); enhance mutual transparency and accountability in Non-State Actors’ and local council budgets in line with the NAIP; and enhance national level coordination and collaboration among sector players in contributing to the NAIP amongst others.

Mussa said FUM played a greater role to see Tukamulane transform from an association to a cooperative.

He says this brought another change as they completely bid farewell to vendors and are now selling their crop to manufacturing companies in large quantities at good prices like K400 per kilogram in the case of last growing season.

"My home is transformed completely and I do not find it difficult any more to send my children to school," said Mussa.

Tukamulane cooperative in Namwera - Mangochi has to date employed a secretariat to manage its finances and plans to open a factory that will be adding value to their Soya bean and come with byproducts.

They are now a trusted grouping that has won the heart of another organization that has assisted them with a K72-million grant to boost their soya bean farming.

A similar story is of rice farmers in Machinga district. 250 farmers have come together to form Domasi rice farmers cooperative.

Chairperson for the cooperative, Gift Lazalo, also boasts that production has improved following capacity building trainings they got under the project Strengthening Inclusive Agriculture Sector Growth and Sustainable Natural Resource Governance in Malawi.

Lazalo says this has been an eye opener as they are now fetching better prices for their rice than previously when each farmer sold individually.

"We are enjoying the labour of our hands unlike previously when unscrupulous vendors robbed from us.

"We are shortly planning to start packaging our rice and hopefully we will make good money," said Lazalo.

This is the same tale for cotton farmers in Balaka where amidst difficult times for cotton farming Malawi, those under Rivirivi cotton scheme are still making profits.

Dimex Funsani says the training they got from FUM assisted them come together and started selling their lint jointly, thereby, dodging vendors who have been duping them for years.

However, Chief Executive Officer for CISANET, Pamela Kuwali says the National Agriculture Policy and national agriculture investment plan are rich to transform the agriculture sector in Malawi, but there is a need to select key priority areas for a certain period.

"We can select some key things in the policies and ensure there is transformation to improve production for food security and commercialization while promoting access to market among others.

"Aggregating farmers in groups is another catalytic issue to consider as it has proved effective already," said Kuwali.

The civil society organizations in the districts have also joined CISANET to develop strategic plans for agriculture at local level.

Chairperson for civil society organizations in Balaka, John Bamusi, says: "We are currently developing a strategic plan as a blueprint to ensure that agriculture improves in the district.

Apart from Balaka, Machinga and Mangochi, farmers in Lilongwe, Mchinji, Dowa and Ntchisi are likely to benefit from CISANET intervention which is assisting farmers come together in groups and at the end improving production and market access.