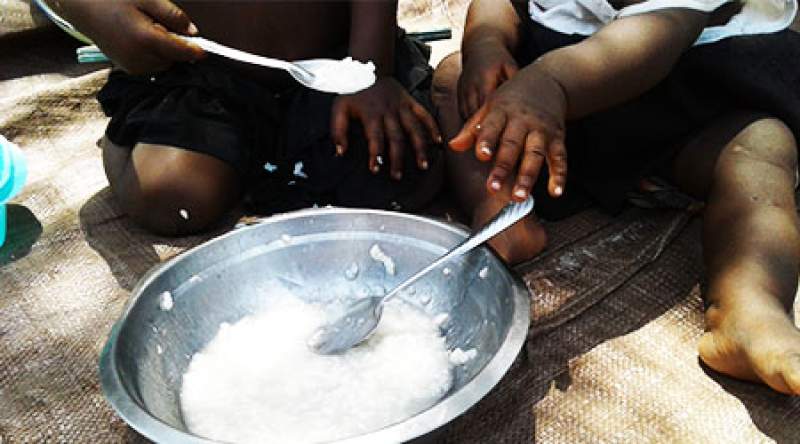 Precious is three years old. But he can neither walk nor sit. Neither can he speak.

“Some of his body parts do not function properly. He cannot eat solid foods. Only liquids and soft foods such as porridge,” she says.

His condition left the mother desperate on what kind of food to give Precious. He became malnourished as a result.

“I was ignorant on how to prepare nutritious food for my child,” says Eneles from Robert village, Group Village Headman (GVH) Bester, Traditional Authority Lundu in Malawi’s Lower Shire district of Chikwawa.

Precious is not the only child facing wrath of malnutrition in the district.

Patuma Maison was even ashamed to move around with her two-year-old daughter because she was stunted and wasted.

“She was discriminated against by the communities. She was a talk of the village because of her appearance due to malnutrition. She lost weight,” she said.

Words hardly came out of her mouth to further describe her child’s appearance.

At last, Maison said that her daughter “was under-weight. At the hospital, doctors told me that my child is malnourished and that I needed to do something.”

Chikwawa is a flood prone district due to its geographic position. This puts people in the district at higher risk of malnutrition, stunting and wasting as indicated by Feston Katondo, the district’s nutrition officer.

“Just for an overview, we are at 32.6 percent for stunting, 13 percent for underweight and 5 percent wasting for under five children.

“One of the contributing factors is that the district is prone to floods and that affect food production. It is also too hot here and this affects production as well,” he said.

GVH Robert recalls the trauma that the Cyclone Idai caused on his subjects in 2019.

“The Cyclone washed away crops and food items from many households. Many families were left destitute.

“With time, consequences started to be seen as more children developed stunting and malnourished because of lack of food for our children,” he said.

Malnutrition in Malawi is a major challenge, not only for the under five children, but also for pregnant and lactating mothers as well.

It is for this reason that in 2017, the Malawi Red Cross Society (MRCS), with funding from UNICEF, initiated the Scaling Up Nutrition (SUN) in four districts namely Mulanje, Mangochi, Neno and Chikwawa.

“Under the SUN Project, I was taught how to prepare nutritious food fit for Precious. I learnt how to mix groundnuts, milk and other foods for Precious’ porridge.

“This is working so well for my child. His situation could have been worst had it not been for the lessons I learnt from Malawi Red Cross under the SUN Project,” says Masauko.

It is the same smile shared by Maison who now sees a clear future nurse in her once nourished daughter.

“We were ignorant on how well to prepare good food for our children who were malnourished. I was approached by SUN officials who invited me to attend their trainings.

“I learnt how well to prepare nutritious porridge that contains all food groups. I went back home and started practicing that for my child. My child is now fully transformed. She is very healthy now.

“I see a nurse in her, the sight which was blurred before. I am very proud of her and I am sure she will become one,” she said.

The district’s nutrition officer, Katondo, testifies that “SUN has great impact in terms of malnutrition levels because our district target by 2022 is to be at 22.6 percent for stunting and 11 percent for underweight and 3 percent for wasting.

“I believe that the interventions under the SUN Project are also helping a lot because, as you can see, through the care group model, we have capacitated a lot of caregivers and promoters in terms of food preparations and how to produce food and how to take these diversified meals in their homes.”

One of the promoters, Chrissy Fole, says “there is an improvement in diet in this area. People in the area are farmers but they lacked knowledge on how well to prepare their food.

“But now, as you can see yourself, things are improving. We cultivate beans and maize, for example, and we encourage people to use locally available food to prepare them into very nutritious meals for our children’s health.

MRCS Chikwawa District Projects Officer, Mabvuto Kunkhoma, says as the Project phases out this December, a number of indicators have been achieved despite some challenges.

“The indicators that we have so far achieved are exclusive breastfeeding because now we are at 93 percent. Our target was 87 percent. We are also talking about number of children receiving minimum acceptable diet; we are now at 47 percent and the target was 36 percent.

The Project’s objective has been to see girls and boys, aged 0-5, in targeted districts, with a focus on the first 1,000 days, benefit from early learning, caring, nurturing, a clean and protective environment and quality, integrated, high-impact interventions.