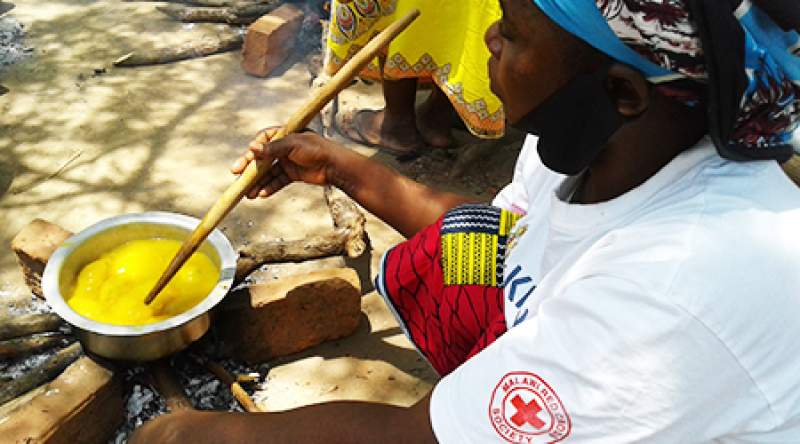 8 April, 2019 is listed on unforgettable days for Patricia Million’s life. It is a day Million and her fellow members of community in Robert village, Traditional Authority Lundu in Chikwawa district witnessed one of worst natural disasters ever hit the area.

“It was around 2 O’clock in the afternoon. I was home. Suddenly, I saw water coming and scores of people running away. I joined them in running as I could not stand the floods.

“Houses including mine were destroyed. Property including farm crops were washed away. Some lost livestock. Some people died in the floods,” says Million in recalling ordeals of the day Cyclone Idai hit her area of Group Village Headman (GVH) Bester.

“I lost all my foodstuffs. I had bags of maize and rice. I had chickens and goats; all were washed away by the floods,” she said.

Million is among survivors of Cyclone Idai who were left destitute and foodless in her area.

“We survived on piece works which provided us some little cash to buy maize husks for food. We bought that from some people who were lucky to have left with some foodstuffs,” she said.

She adds that she is “living in a rented house. I am yet to renovate my house. I pay K3, 500 a month. I am not working. I rely on piece works in people’s fields for survival.”

Million says since the floods, every rainy season reminds her of the tragic 8 April, 2019.

“We just feel like the floods will hit again,” she says.

“The floods affected our diet heavily, especially on our children. We are yet to heal from the effects of the cyclone. Children started developing malnutrition and stunting because households find it hard to recover their food. We eat just to live,” she says.

19-year-old Patuma Maison was a student that time.

She witnessed the tragedy that paralyzed her education before becoming a mother of a one year eight-month-old Promise Maison.

“Our education was heavily affected. It was hard for parents to raise funds for my education. All our foodstuffs were washed away.

“We started living a subsistence life; hand to mouth. Any single penny was targeted on food. This also contributed to malnutrition because people had no choice of food. When the floods hit, we escaped to holding camps but the assistance was not enough there,” she said.

Group Village Headman Bester says it is not easy for his subjects to recover from the Cyclone.

“When floods hit, people’s foodstuffs get washed away. For them to recover, it becomes very difficult. This contributes to malnutrition as time goes.

“As a leader, I do not see future in stunted and malnourished children. These children do not think properly. They cannot do well in school. People relate their situation to witchcraft,” he said.

The Cyclone hit at a time Malawi Red Cross Society of Malawi was implementing the Scaling Up Nutrition (SUN) programme in the district.

The project is being implemented through the care group model as designed by the Department of Nutrition, HIV/AIDS (DNHA) of the Ministry of Health.

The focus is on nutrition specific and nutrition sensitive intervention aimed at addressing underlying causes of malnutrition.

The UNICEF funded SUN which was also implemented in three other districts of Mulanje, Mangochi and Neno was earmarked to start from 2016 to 2020.

However, the project was extended from May 2021 up to December 2021with a revision of the outputs and indictors.

GVH Bester feels cases of malnutrition and stunting in his area could have been worst if it were not for SUN project.

“Cases of malnutrition and stunting are going down owing to teachings of cluster leaders from Malawi Red Cross Society. My people are now healing from Idai with assistance from Red Cross.

“What Malawi Red Cross Society is doing is a solution to our problems if they proceed. This area will forever be prone to floods and drought. The best way to address that is to proceed with such programmes.

“I am grateful to Red Cross and government of Malawi. Government alone cannot manage to assist us all but with support from organizations such as Red Cross, we will forever be grateful. Red Cross is assisting our lactating mothers to ensure that our children are healthy. Such programmes are performing wonders in my area,” he said.

Chikwawa District Nutrition Officer, Feston Katondo, testifies that “SUN has great impact in terms of malnutrition levels because our district target by 2022 is to be at 22.6 percent for stunting and 11 percent for underweight and 3 percent for wasting.

“I believe that the interventions under the SUN Project are also helping a lot because, as you can see, through the care group model, we have capacitated a lot of caregivers and promoters in terms of food preparations and how to produce food and how to take these diversified meals in their homes.”

Mabvuto Kunkhoma, MRCS Chikwawa District Projects Officer, says “the indicators that we have so far achieved are exclusive breastfeeding because now we are at 93 percent. Our target was 87 percent.

“We are also talking about number of children receiving minimum acceptable diet; we are now at 47 percent and the target was 36 percent. We are also looking at stunting. As we were starting the project in 2017, it was at 37.2 percent, now we are at 32.6 percent.”

As the programme reached its final day on December 31, 2021, GVH Bester’s prayer is to see an extension to it to further help his subjects heal from Cyclone Idai wounds.