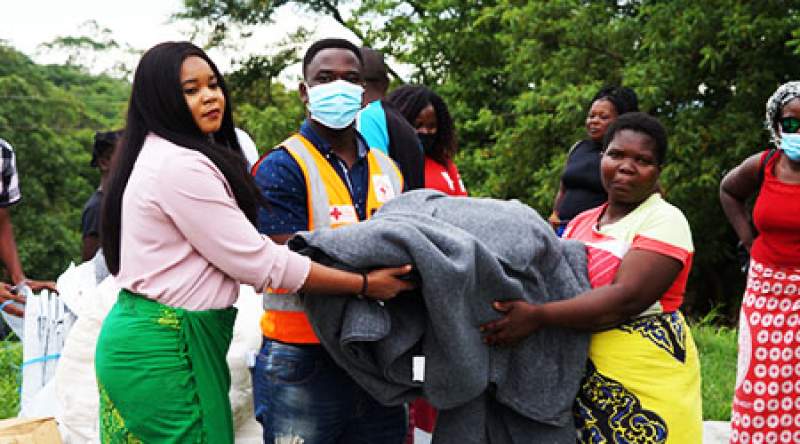 Chipepa (right) gets the donation - pic by Christopher Sande

The Blantyre City Council (BCC) says it has made a proposal of MK20 billion to government and development partners to root out informal settlements in the city amid reports that such construction works along rivers are exposing people to floods.

BCC Assistant Director of Environment William Chimzinga told Zodiak on Saturday that they are optimistic the request which the council has submitted to World Bank, Indian Government, Scotland and Japan international Cooperation Agency, once approved will assist them to relocate people living in prone areas and conserve Nasolo, Limbe and Mudi river.

“As Blantyre City Council, we are worried with frequent occurrences of floods that are largely being fueled by poor waste disposal and informal settlements. We hope that the proposal that we have submitted to various partners will assist to improve the current situation,” said Chimzinga.

He then added that the council will continue to conduct waste management awareness and education and implement clean up days in the city.

The BCC’s proposal comes when Malawi Red Cross Society (MRCS) is currently engaging residents to move upland after floods damaged several houses and washed away property in Ndirande township a few weeks ago after Nasolo river broke its banks.

A few days ago, an official from MRCS Joseph Mwase told Zodiak after donating assorted items to 111 households that were affected by floods in Ndirande township that people need to adhere to calls for them to move away from flood prone areas in order to save lives and property.

One woman, from Makata in Ndirande township Kandechere Chipepa says it is difficult for her to move away from her current home because it requires a lot of money to settle at a new place.

“I cannot manage to get a new home upland. While commending Malawi red Cross for supporting, we ask government and non-governmental organizations to provide us with starter parks to start small scale,” she said.