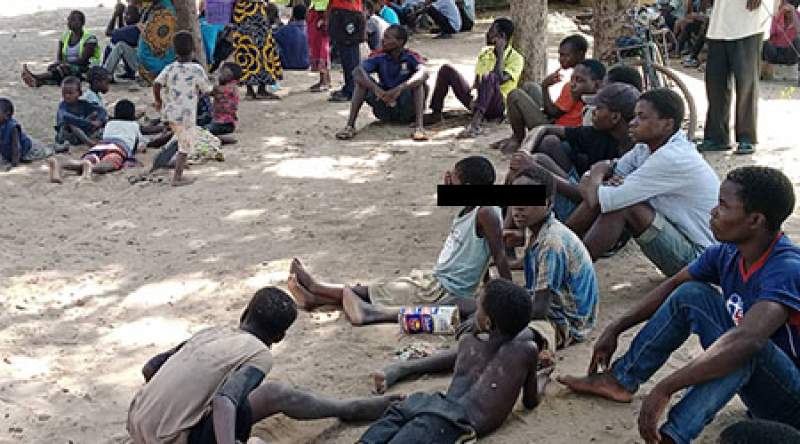 - Some of the Mozambicans at Nsanje camp - pic by citizen journalist

About 1, 400 Mozambicans have fled their homes into Malawi following Tropical Storm Ana which has devastated parts of Malawi, Mozambique and Madagascar.

Matias Zuze who recalls events on the fateful day in Malekano village of Mozambique says 1, 334 people have fled their homes.

“There are no houses left there. All of them were taken away by the floods. Water reached our heights; we have been heavily affected. That is why we have come all the way here in Malawi to seek help.

“My whole village has been affected. My village contains 163 people. Some of them have failed to come over due to logistical challenges,” he said.

Zuze who is also a traditional leader says he could not count in total how many people have been affected by the Storm “because everyone was running for dear life.

“Some people have been in trees for about five days. I am not sure of how many died but about 15 are missing and are feared dead.”

Authorities at Nsanje camp where survivors of the Storm are staying say 2, 491 people in the camp were from neighboring Mozambique.

One of the people, Yohane Luka, however, claims that they have not been given food.

“We have stayed for three days without food. When food came, it was only given to Malawians. For us Mozambicans, we were only given a cup of food. Our friends have been receiving bags of maize and flour,” he claimed.

“We give food to everyone in the camp regardless their nationality because they are all affected. We have not received any report of ill-treatment in the camp,” he said.

Malawi Red Cross Society Spokesperson, Felix Washoni, says “the challenge which we had initially was that the Mozambicans started receiving the food late.

“Malawi government rushed to do this task and came up with a proper way of distributing the relief items to the deserving people,” he said.

Isaac Falakeza, Area Civil Protection Committee Chairperson, says “it is equal treatment. These Mozambicans are just very close to Shire River on the boundary. It is very far from here to where their government is so everyone is treated equally.”

The acting resident coordinator of United Nations in Malawi and UNICEF representative, Rudolf Schwenk, appreciated the situation at the camp.

“I spoke to families who are in the camps. They lost everything and the needs are enormous. We need to see what more can we do,” he said.