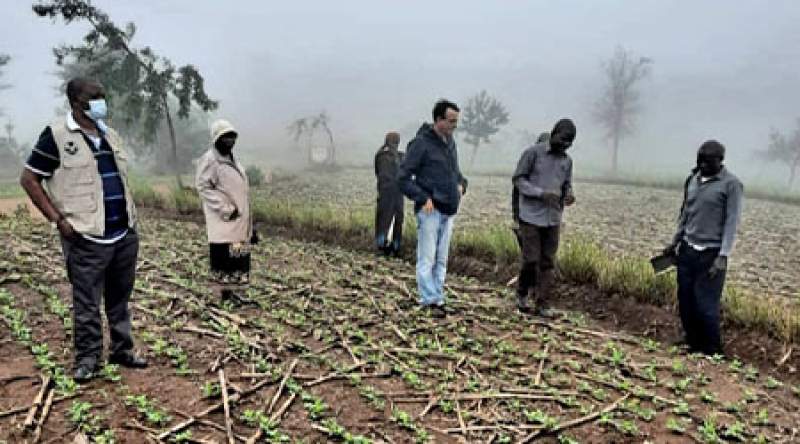 A principal scientist for International Maize and wheat improvement center (CIMMYT) has tipped farmers in Malawi and southern Africa, to fully adopt conservation agriculture saying it has proved ideal amidst climate change challenges.

The scientist Dr. Christian Thierfielder said after appreciating crop stand on trial fields in Malawi’s five districts where in collaboration with Total land care and Machinga Agriculture Development Division (ADD) are working with farmers to come up with suitable seeds and agricultural technologies.

Dr. Thierfielder said is impressed with how farmers surrounding the trial farm plots are adopting the seeds and conservation agriculture technologies.

He said:- ”The new technologies are proving effective as the crop stand on conservation agriculture fields is encouraging unlike crops under conventional agriculture, despite all the effects accompanying climate change.

“We are hopeful that if more farmers adopt conservation agriculture, many will be food secure even when challenges like dry spells and others continue causing panic.”

Richard Museka, Project manager for Total land care which is partnering CIMMYT and Machinga ADD for this initiative; says conservation agriculture has not only worked for maize but also legumes.

“Going round the impact districts, we have seen farmers taking conservation agriculture to their legume fields where it is as well proving effective,” said Museka.

Farmers Beyard Aufi of Mthipo village in Machinga district and Foster Jackson of Herbert village in Balaka say adopted conservation agriculture after observing the trial farm plots in their localities.

“The better thing with this approach is that we are learning together with the extension workers without them imposing on us, and we chose what we see and practice it in our fields based on our own conviction,” said Aufi and Jackson in separate interviews.

According to Mphatso Gama of Machinga ADD, over 200 thousand farmers have adopted conservation agriculture technologies in Dowa, Salima, Nkhotakota, Balaka and Machinga districts where the project set up several trial farm plots.

Gama said: - “Some farmers have taken the initiative to their farms on a larger scale having seen for themselves how the crop stand has been on the trial fields which we have been exchanging experiences for the past 17 years.”