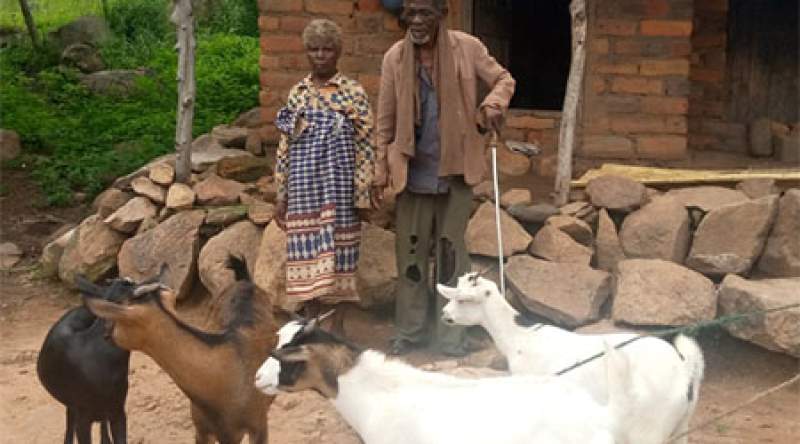 Mteteya with his wife and goats - pic by Christopher Sande

Gladys Tione Pedro (not a real name) is a 16-year-old girl and a mother of a nine-month-old baby girl. She is the head of a child -headed family.

Apart from her daughter, she also looks after three siblings. This child headed family is living in the area of Traditional Authority Kapeni in Blantyre.

Gladys says her mother dumped them when a stepfather sexually abused and impregnated her.

“The father threatened to beat and poison me if I revealed the abuse. I then became pregnant which led to the arrest of the stepfather. The stepfather is now in prison while the mother is nowhere to be seen,” narrates this young mother, saying since then life has been unbearable.

She adds that sometimes they do piece works for survival.

The teen mother however says they got a huge relief when they started benefitting from the social cash transfer program.

“We are at least able to buy food and other basic resources. We get an allocation of K12, 000 every month and we thank government and development partners for the assistance.

“Our request is that we have so many needs but the money is inadequate. I ask the government and donors to increase the apportionment,” said Gladys.

Some 20 kilometers lies Jordan village under Lundu area in the same district. Here, we meet a 90-year-old visually impaired man seated on a veranda of his grass thatched house with his wife.

He is Bisioni Mteteya. The old man says the cash transfer program has significantly improved the living standards of his family.

“I stay here with my two grandchildren and wife. Through the cash transfers, we are able to buy food and we also bought four goats. But I would like to buy iron sheets to roof my house and for this to happen, the government should increase the monthly allocation of K10, 000 amount which we receive,” said Mteteya.

Similarly, an 80-year-old woman, Belita Yohane from Ching’amba village TA Onga in Chiradzulu is all smiles. She says through the intervention, she has managed to build an iron roofed house.

“In the past, when rains came, I would complain but now I am happy to sleep peacefully in my house. I also bought chickens and goats. Social cash transfer has improved my life.

“In addition, I make sure that my compound is clean,” said a jovial grandma.

Peter Chiophya, aged 35 and his wife Brenda of Zimenyani village, TA Chitera in Chiradzulu are also praising the intervention. They have constructed a decent house, rearing pigs and doves.

Maona added that the program is achieving its objectives of improving nutrition, health, shelter and eliminating extreme poverty.

“We are delighted that the social cash transfer program is fighting poverty. We therefore ask the beneficiaries to keep using the money wisely to achieve social economic development,” said Maona.

Blantyre is part of the 11 districts supported by the World Bank for the social cash transfer program facilitated by the national Local Government Finance committee.