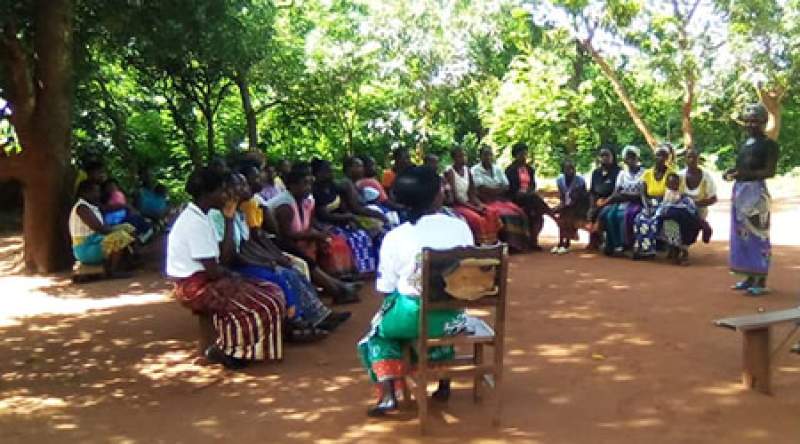 An initiative dubbed Community Complementary Feeding and Learning Session (CCFLS) which European Union funded AFIKEPO project undertook towards the end of last year in Mulanje district has been described as a success as participants testify to have eradicated malnutrition among their children.

Last week, Zodiak Online visited Thanguzi Care Group and Umodzi Care Group in Traditional Authorities Chikumbu and Juma respectively where the mothers said their children are healthier as compared to their previous conditions because they are now feeding them nutritious porridge whose preparation they learnt during the CCFLS locally called “masanje”.

“My three-year-old boy was weighing 8.7 kilograms and each time I took him to the hospital, the Health Surveillance Assistants (HSAs) were accusing me of failing to feed the baby and the usual responses that I was feeding him three times a day were landing on deaf ears. I had nothing to do until I joined this care group under AFIKEPO,” said Grace Cheloya from Reuben village in T/A Chikumbu.

She added, “Now I am glad to tell you that my baby is weighing 13 kilograms”.

Cheloya attributed this significant weight increase to the knowledge on preparation of nutritious porridge she gained at the CCFLS.

But how is this nutritious porridge prepared? Beatrice Salema, a cluster leader from Thanguzi Care Group in T/A Chikumbu explained; “We put maize flour (mgaiwa) in hot water while on fire and stir it, then we put in the porridge any of the following; pound vegetables, milk, fish or meat soup, eggs or milled groundnuts (nsinjiro),” said Salema.

On nsinjiro, Salema said they are encouraged to buy the raw nuts and make nsinjiro themselves.

She said this is because some people who sell already milled groundnuts, just mix good and rotten nuts and mill them together which is not good for children.

Patricia Chinangwa from Kondwani village in T/A Juma also shared the benefits she gained from the CCFLS.

“At first, it was just the usual mgaiwa and salt or sugar porridge but the story is different now as I diversify the ingredients (cooking oil, vegetables, eggs, milk, fish and meat soup),” said Chinangwa.

During the CCFLS, it was not only nutritious porridge preparation the mothers learnt. They were also told and encouraged to have backyard gardens for vegetables.

Fatsireni Maliro from Kondwani village in T/A Juma told us she has a kitchen garden at her house and she does not buy vegetables because she has them in her backyard garden.

“Basically, I grow local vegetables such as bonongwe and chisoso because they are easy to grow and are resistant to pests and diseases and you do not need to apply fertilizer to these vegetables,” said Maliro.

She challenged to provide vegetable seeds to anyone in need of them. Why the delay then?

Matilda Lemani is Thanguzi Care Group Promoter. She said the CCFLS has transformed the nutritious status of Reuben village.

“At first, we together with Agricultural Extension Development Officers and HSAs conducted a growth monitoring and promotion exercise targeting 120 children and out of this figure, 30 were found to be malnourished and we noted that this was a challenge. That was the beginning of the 12-day CCFLS here,” said Lemani.

She said there is a great change in the village.

Lemani’s sentiments were shared by her counterpart of Umodzi Care Group at Kondwani village in T/A Juma, Mrs. Beatrice Simoni.

“In this area, malnutrition levels were always high during the lean period like this because mothers had no knowledge on nutritious porridge preparation from the little food we were having but after attending the CCFLS, I can challenge you, you cannot see any malnourished child whose mother attended this session,” said Simoni.

Principal Nutrition and HIV/AIDS Officer at Mulanje District Council Mayamiko Makondi told Zodiak that during CCFLS mothers are trained in food processing and preservation as well as proper feeding practices which prevent Malnutrition of children.

He called upon mothers to embrace the CCFLS concept through participatory adult learning that gives an opportunity to actively learn and practice new child feeding behaviors.

Apart from Thanguzi and Umodzi care groups, ten other care groups within the district also benefited from the CCFLS.