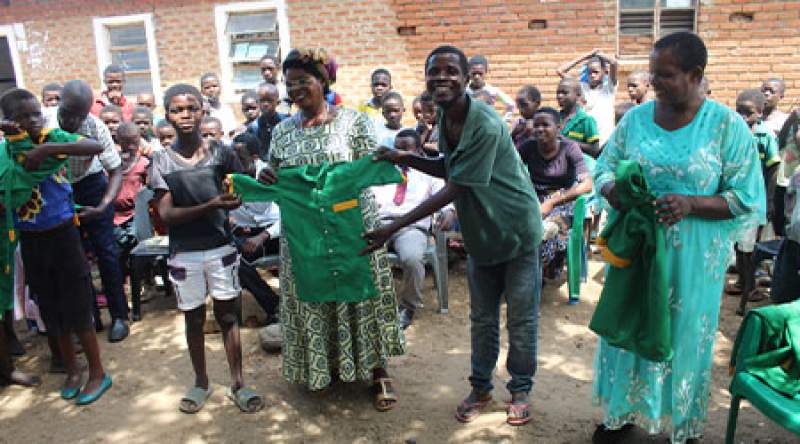 - pic by Alfred Guta Part of the donation ceremony

Nsanje's Nyanthepa Community Radio (NCR) on Wednesday bailed out 30 orphans and vulnerable learners in the district by providing them school uniform.

"We have used K200,000 from our own institution, thought it wise to share the little with have with the communities," explained Guta.

The institution has so far reached out to needy learners at Chikunkha, Mpepe and Mabungwa Primary Schools.

Guta further said, "we have been doing such initiatives for years, envisage to scale it up but that will depend on availability of resources."

One of the beneficiaries, Masautso Fachima aged 12, a standard four learner at Mpepe Primary School, said, "I am grateful, I didn't have a school uniform. It has been affecting my learning since I have been looking down upon myself.

He added;" my mum depends on piece works to buy clothes for me.”

The sentiments were echoed by another learner, Maria Wilson, aged 12.

Maria, a Standard 5 learner at same school, believes their performance will now improve, "inferiority complex will no longer be an issue, most of my friends have school uniform."

Mpepe Primary School head teacher, Ireen Kanaventi, has described the support as timely, "we have so many needy learners who do not have school uniform.

"We are happy because these learners some of them are orphans, some vulnerable, will believe the support will make a difference.

"They have addressed inferiority complex issues," she said.