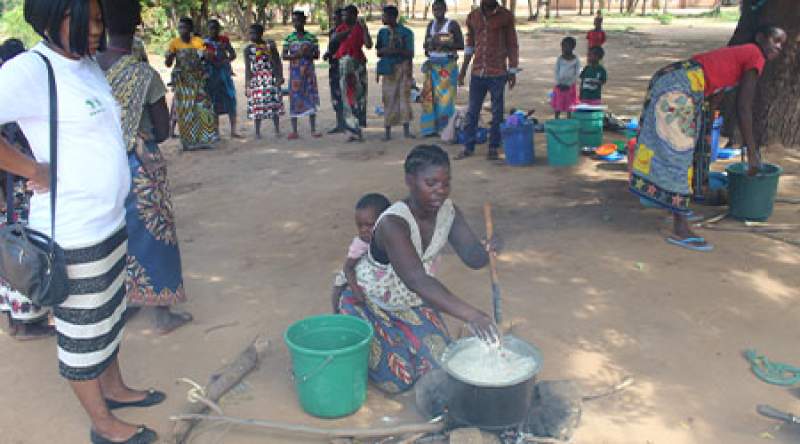 A nutrition assessment of under 5 children in flood survivors camps in the area of Traditional Authority Ndamera in Nsanje has revealed that over 100 children out of 419 were found to be moderately malnourished.

According to the assessment, three children were severely malnourished and were referred to Ndamera Health Center where they were rolled into Outpatient Therapeutic Program.

Mpesi observed that the cyclones might have contributed to high malnutrition levels among the children.

He, nevertheless, believes an intervention dubbed community led complimentary feeding and learning sessions in the camps under Sustainable Fisheries and Aquaculture Development and Watershed Management (SFAD) project, will make a difference in improving the situation.

"Basically, this is part of the interventions that we are implementing specifically to address malnutrition issues in the district.

"It has a number of objectives; we want to rehabilitate those that are malnourished, transfer the skills especially the food preparation skills but also provide nutrition education so that they know what to do when they go out," explained Mpesi.

He added, "we were finding out the status of malnutrition in the camps in the wake of floods. With the floods we expect to have some difficulties on nutrition status of the people especially when there is displacement."

According to Mpesi, the district's malnutrition status in camps is at 6 percent as per aggregated data.

SFAD Project Nutrition Specialist, Chisomo Dambula, told Zodiak Online that they are duty bound to support interventions aimed at alleviating malnutrition in the country through the implementation of the project which is benefiting 18 districts.

"So as part of the interventions which SFAD is sponsoring, we are also promoting fish consumption to help in alleviating malnutrition in the country.

"Nsanje is one of the districts that has been hit hard by malnutrition of children and pregnant women and so we thought it was important to support this initiative especially after the effects of cyclones and the floods to help improve and treat malnutrition cases in the district.

"We expect an improvement on the malnutrition status of the children admitted in the program for the 12 days and also expect them to learn on how they can include fish in diets of children," explained Dambula.

A Nutrition Promoter, Magret Chikutireni 32, from Jimu 2 village in the area of Traditional Authority Ndamera, told Zodiak Online already the intervention is making a difference.

"My child for example was weighing 12 kilograms but now he is weighing 12. 7 kilograms, this means the good nutrition practices we have learnt have had a positive impact,” she said.

Magret further dared her fellow mothers to practice the same even after leaving the flood survivors camps.

The SFAD four-year project which started in 2020 is being funded by African Development Bank (ADB) and Malawi Government.