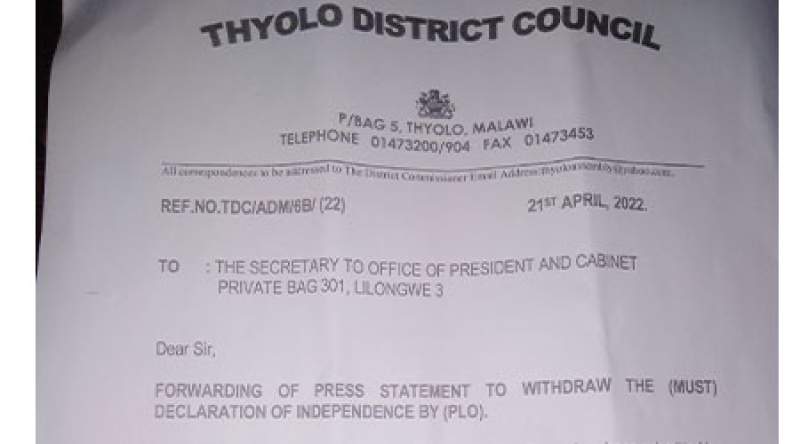 A forwarded letter to OPC - pic by Luka Beston

The Registered Trustees of Peoples Land Organization (PLO) has written President Lazarus Chakwera of its intention to withdraw the 2016 declaration of Thyolo and Mulanje (MUST) as a sovereign state.

In a letter dated February 25, 2022, signed by PLO's Board Chairman Fadson Mleme, but has been forwarded to President Chakwera through Thyolo district council on Thursday, indicates the recent extraordinary general assembly resolved not to secede from Malawi.

In 2016, Vincent Wandale, Chairperson of Peoples Land Organisation (PLO) declared African Traditionalist Monarchy of the United States of Thyolo and Mulanje (MUST) as a sovereign state because Malawi government had been systematically dodging the issue of addressing the plight of many landless communities which they claim were obtained fraudulently by the colonial settlers.

"An extraordinary general assembly of the members of PLO convened at Khonjeni turn off secretariat on February 3, 2022, resolved not to proceed with the Republic (secede from Malawi) .... Therefore, we would like to extend a hand of friendship and love to Malawi government as citizens of Malawi"... reads the letter in part.

It further indicates the assembly appointed Chakwana Dan Chitsulo, as new Chairperson for the organization.

Meanwhile, Thyolo District Commissioner Douglas Moffat, has drawn positives in the decision which would facilitate discussions over land issues in the districts.

"Malawi is a sovereign state and therefore, nobody, I just want to say that nobody can declare part of that country as not part of Malawi. Therefore, am quite happy to receive this letter and am pleased to have it forwarded to the Office of President a d Cabinet," He said.

However, in a dramatic twist of events, speaking to Zodiak Online, Mleme, has disowned the letter which he said was authored when he was unwell and referred us to PLO' secretary Precious Lester, who was not available for comment.

Similarly, PLO Chairperson Vincent Wandale, said their stand remains unchanged, describing individuals behind the letter as misguided, saying if that was the case, the first thing was to close the offense he is answering in court same.

"The current stand has not changed yet because as you know the status quo, people are refusing that we declared our independence. So, if there are some people who have come in the open to say indeed we declared independence and that they are withdrawing, the first thing they were supposed to do was to close the case which I am still answering in court regarding the same, so that the statement can make sense.

"Otherwise, who is mad between those who arrested me and these people who are telling the nation, that things have changed when I am answering a case in court regarding things they say are now withdrawing? Are you seeing any sense in that"? Wandale asked.

Wandale has since requested Malawi government to arrest those behind the letter for justice to prevail.