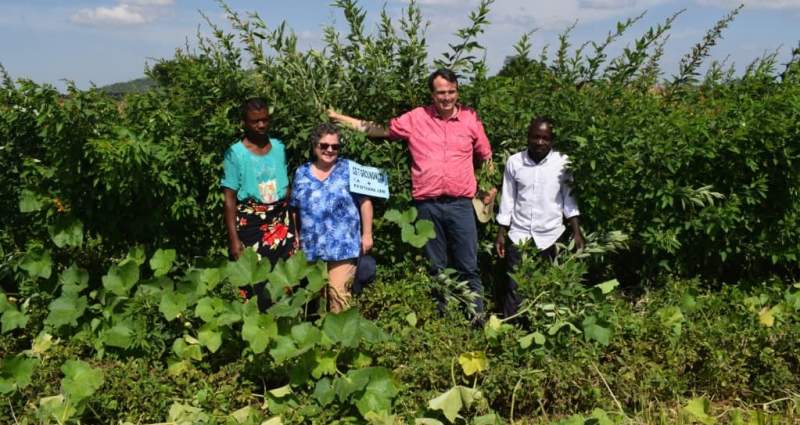 Part of the visit to the farmers - pic by Moses Masiye

An agri-food expert says it is high time Malawi smallholder farmers moved away from old agricultural methods and fully adopt conservation agriculture (CA) which is proving effective amid effects of climate change.

Snapp said after appreciating crops on trial fields in Dowa and Nkhotakota, some of the districts CIMMYT is engaging smallholder farmers through trial fields in collaboration with Total Land Care and Machinga Agriculture Development Division (ADD).

She said: "Malawi is however on the right track to adopting conservation agriculture as witnessed by a number of farmers learning from the trial plots and practicing in their fields."

According to Snapp, smallholder farmers may stand firm against the effects of climate change as crops such as maize and legumes have done better under conservation agriculture.

Sub Traditional Authority Chipeni of Dowa also a lead farmer says just like many farmers, it was hard to move from conventional agriculture but the maize stand on trial plots transformed many.

"By and by, many of us are seeing the difference between conservation and conventional, no wonder we are adopting the new farming technology as well as sees varieties," said Chipeni.

Mphatso Gama a crop and conservation agriculture expert under Machinga ADD says they have been engaging farmers through the trial fields in almost all the regions for the past 17 years.

"We are making strides as regards to adoption of conservation agriculture with more numbers than the way we started 17 years ago," said Gama.