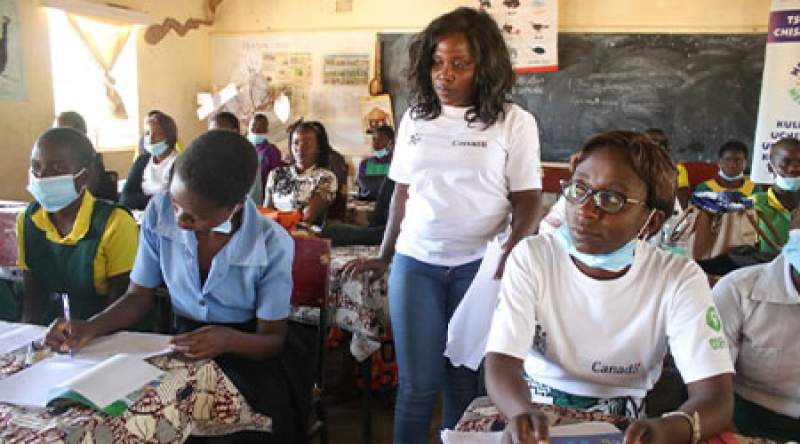 NFYD interacting with the youths, peer educators and matrons on SRHR - pic by Steve Kalungwe

A local organization, Network for Youth Development, has appealed to the youths in the country to embrace a culture of demanding sexual health rights and saving in a bid to take a leading role in developing the country.

The organization’s project manager for Her Future, Her Choice, Sekanawo Mwatibu says youths both in school and out of school need to understand their value and teach one another best ways of achieving life goals which include access to sexual and health reproductive services.

The Network for Youth Development is achieving this through a project called " Her Future Her Choice" where is it encouraging the youths to take part in sexual and health reproductive activities.

"We are strengthening sexual and reproductive health rights of adolescents in our communities by among other things creating demand for them by our youths", said Mwatibu.

Mwatibu further said youths who are between the age range of ten to twenty-three are sexually active hence a need to creative a space where they can be accessing different family planning services and exchange life goals.

She argues to the point of saying that youths need to be in clubs for knowledge exchange and above that being taught on ways of saving their monies through peer educators so they become responsible citizens.

NFYD is also engaging matrons and students in this project where in total it has trained forty of them as role models and peer educators.

"As students, we need to understand that times have changed and we need to abstain from harmful sexual practices that may put our future in jeopardy", she said.

She however appealed to her peers to use condoms and other contraceptives if they cannot abstain.

Jessy Kapalamula, a matron at Pende primary school in T/A Chimutu, said the project is now bearing positive fruits where it has helped learners to become responsible with their bodies.

"We have seen a significant amount of change in our girls and boys in terms of how they manage their sexual behaviors. All is thanks to the project", shines Kapalamula.

The project is being funded by the Global Affairs of Canada through Oxfam Malawi in the areas of traditional authority Malili and Chimutu in Lilongwe district.