Flood Survivors Struggle to Recover; ECHO Bails Them Out 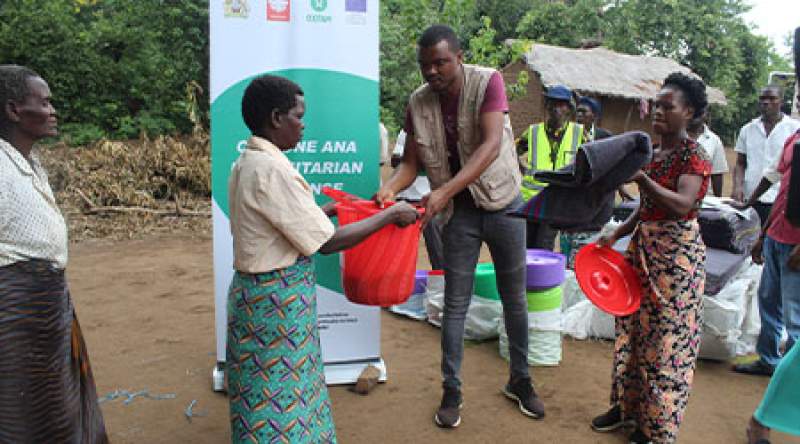 Kaisi handing over the items to survivors - pic by Alfred Guta

Thousands of survivors of cyclone-Ana induced floods in Nsanje and Chikwawa districts are struggling to rebuild their lives as many are still in dire need of support.

Survivors in the disaster prone districts told Zodiak Online life has been tough saying they are struggling to recover from the shocks.

Malita Zakaria from Mkwapatira village in the area of Traditional Authority Malemia in Nsanje narrates that she is struggling to cope.

"I am a mother of five. My husband left way back some six years ago, apparently to search for a job. I don't know his whereabouts. Some say he is in South Africa.

"So life has been tough as he left me with five children. It has been so hard the floods have worsened my situation.

"I am really struggling as one of the children is in standard eight and requires adequate support," explained Marita who nearly burst into tears.

She added, "my children and I were rescued by boats which could only carry people and not livestock or any household material.

"I lost two goats and 15 chickens, they were all washed away by floods.

She hailed a multimillion kwacha two month project which the Catholic Development Commission (CADECOM) in partnership with Oxfam is implementing in the district in which Cyclone Ana survivors are accessing various items and cash amounting to K30,000 per household.

Another survivor, Mchacha Manyozo aged 18, from Kalupysa village in the area of Traditional Authority Mbenje in Nsanje district also tells us that the journey to recovery has been rough.

"I lost my parents to 2015 floods and I live alone. The floods hit us at around six in the morning and destroyed my house.

"Life has been hard as a result as I had nowhere to seek shelter. The situation forced me to move to the nearby Catholic church," explained Manyozo.

He added, "It really affected me because I am a student and I lost my scholastic materials and other property including clothes. My parents died after we moved from Mozambique.

"My education has been greatly affected as I am struggling to access learning materials. I would appreciate if land could be provided so that I relocate for safety, he explained.

I support myself sometimes my neighbors come to my rescue. The support I have received from Oxfam will make a difference because I mostly bank on piece works.

"I have used part of the money to pay my school fees as I am struggling economically which is also affecting payment of fees," said Manyozo.

An elderly woman, Dorica Sitolo from Bumula village in the area of Traditional Authority Ngabu in Chikwawa is no exception, she too has been struggling.

"My husband has been ill and so survival has been hard. I have been banking on piece works to buy food and other household necessities since we lost some to the floods," she lamented."

Oxfam Media and Communications Manager, Daudi Kaisi, says the EU Civil Protection & Humanitarian Aid - ECHO project focuses on helping the communities to rebuild so they are able to pick up and start their lives again since they lost a lot to floods including household property and crops.

"We are also looking at issues of gender and protection by training communities on the same knowing that women and girls are the most vulnerable when disasters of this nature hit.

"Besides we are providing menstrual hygiene kit. We are doing this in light of the fact that this is the most forgotten when organizations or humanitarian agencies distribute items to flood victims.

According to Kaisi, the family kits which include blankets, cooking utensils "are meant to help communities to be able to buy food where the markets are functioning but also those that want to go home and rebuild their lives they are using part of the money being given to buy materials and plastic sheets."

The ECHO humanitarian response project is also being implemented in Phalombe district.

Over 6000 households in Nsanje and Chikwawa districts are benefitting from the intervention.