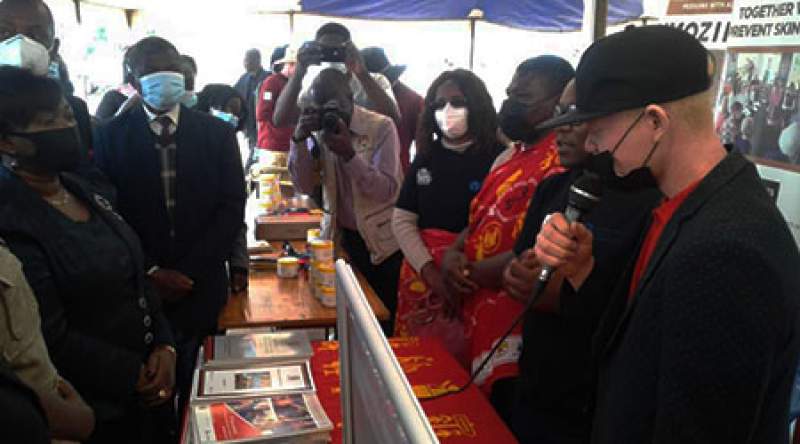 Goliati narrating the story to Hara - pic by Happy Njalam'mano

A boy with albinism who is also a child parliamentarian for Mwanza Central, Chisomo Goliati, says there have a number of interventions on matters that concern them courtesy of child parliament.

Goliati told speaker of Malawi National Assembly, Catherine Gotani Hara, that some of the issues that have been addressed by authorities are child marriages and access to potable water.

He said this on Tuesday when Hara inspected a pavilion by Save the Children at Mpapa Primary School Ground in Blantyre during commemoration of International Albinism Awareness Day.

“Before child parliament came in, we had high cases of child marriages in my area. People also had difficulties to access potable water. However, these issues were deliberated during child parliament sittings and they have been addressed.

“On our part as persons with albinism, we have seen authorities intervening on our safety by providing us with alarms that are meant for us to sound if we are in danger,” he said.

Goliati added that there are other issues that are yet to be addressed such as provision of teachers for persons with special needs.

Hara commended the interventions and pledged to liaise with member of parliament for the area, Nichola Dausi, on how further to support the children in the area.

“We will make sure that with the legislator for the area, we visit you to see how best we can assist,” she said.

Child parliament is a component of the Securing Child Rights through Education and Protection (SCREP) being implemented in the district by Save the Children with support from NORAD.