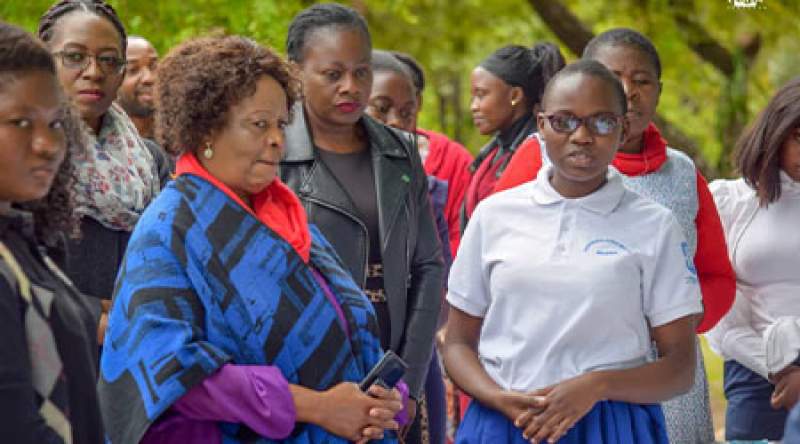 The 2022 All Scholars Retreat was held under the theme “Girl’s, our next generation climate change leaders.” - pic by Hastings Jimani

At least 100 girls from various secondary schools in Mulanje district were on Saturday oriented on climate change and its effects courtesy of Advancing Girls’ Education in Africa (AGE Africa) and Mulanje District Forestry Office.

AGE Africa Country Director Ulanda Mtamba said as part of their programming, they hold what they call “the all Scholars retreat” for all 24 partner schools in the southern part of Malawi and they decided to focus this year’s retreat on climate change and girls.

“During our annual retreats, we have different themes and this year we are focusing on climate change and climate justice as you know this year Mulanje was one of the districts severely hit by Tropical Storm Ana and Cyclone Gombe which led to closure of schools and we want these girls to know causes and effects of climate change,” said Mtamba.

Mtamba said the girls are leaders of today not tomorrow and they have to start acting now especially on climate justice and participate in decision making forums.

Assistant District Forestry Officer Agness Makosana told Zodiak Online that what AGE Africa did in engaging the youths in fighting against climate change should be emulated by other organizations in youth programs.

She said during disasters such as floods and stormy rains, girls absent themselves from school for safety reasons and they also lose school materials such as notebooks, pens and uniforms if their houses collapse.

“Similarly, if there is food insecurity due to prolonged dry spell, girls suffer most and when there is relocation to evacuation camps, girls become more vulnerable to sexual abuse and it is therefore imperative for the girls to actively participate in mitigation of climate change by conserving environment through tree planting activities in their communities,” said Makosana.

Thokozani Mofolo, a form three student from Providence Girls Secondary School told Zodiak Online that for the first time, she has learnt a wide range of issues to do with environment.

“That girls are more vulnerable to climate change should make us be vigilant in fighting against climate change and we will have good environment and good climate for our education,” said Thokozani.

The 2022 All Scholars Retreat was held under the theme “Girl’s, our next generation climate change leaders.”