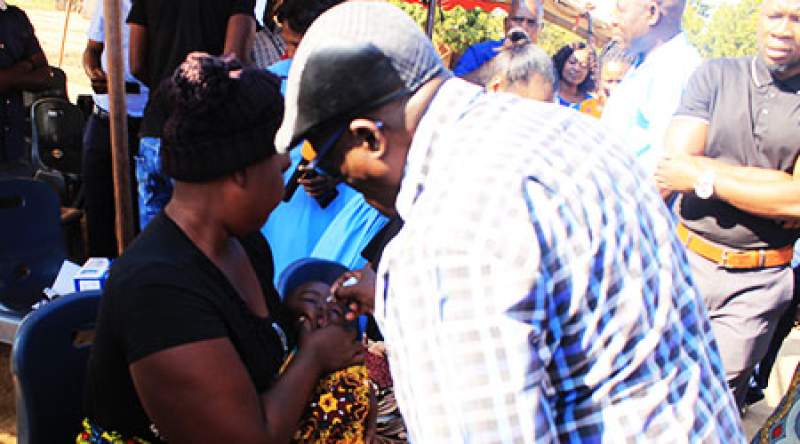 Senior Chiefs in Nsanje have vowed to fight against the tendency of denying people including innocent children access to medication citing polio vaccine over religious beliefs.

Senior Chief Malemia has condemned such a tendency in strongest terms describing it as a violation of a right to life.

He spoke today during a third round of polio vaccination by the district council which targets 55,000 children.

“My message on behalf of chiefs and our people is that we should take the exercise seriously because it has a bearing on the future generation of Malawi.

“If the children will not be vaccinated then we have spoiled somebody’s life but also future.

“They will become deformed for the rest of their lives yet we have an answer, the answer is the vaccine which government with support from the World Health Organization (WHO) is providing, explained Senior Chief Malemia.

He described as worrisome the tendency of denying people including innocent children access to medication saying, “we will be engaging such faith groups.

“Let’s hold hands, you cannot compromise on health especially our children. We should be vigilant against this disease, it can be conquered as was the case hitherto.

He further implored the media help in disseminating right information saying Journalists have a critical role in ensuring that people are well informed about the importance of the vaccine.

The district’s Director of Health and Social Services, Dr. Gilbert Chapweteka, told Zodiak Online, his office has been sensitizing various structures including faith groups on the importance of the polio vaccine to the children.

“We will deploy Health Surveillance Assistants (HSA’s) to various parts of the district, so we should be able to capture a good number of kids.

The district’s Pastors Fraternity, Chairperson, Bishop, Rodgers Alufazema, says today, Thursday, they were expected to engage the district’s faith community on the same.

“We believe some are doing this due to issues of illiteracy so we would focus on both physical and spiritual aspects,” said Bishop Alufazema.

The third round of the polio vaccination has rolled out across the country, a continuation of the exercise, after the discovery of a polio case in Lilongwe, in February this year.