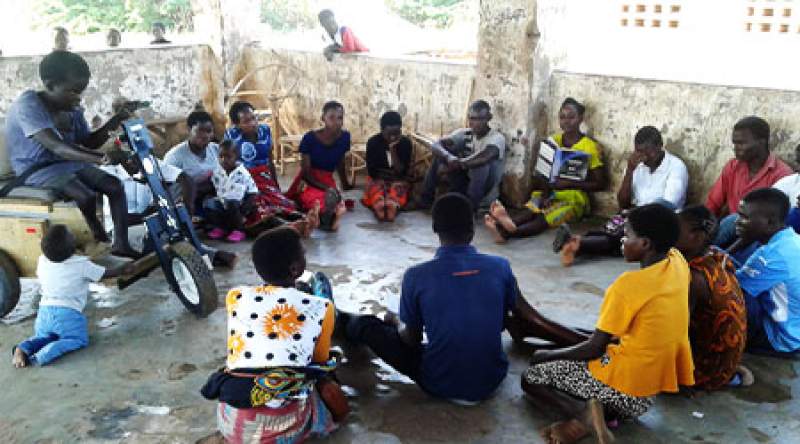 At the age of 13, Ruth is the only child in Ganunga’s family of six to walk in the corridors of a secondary school as a student.

She has just sat for this year’s Junior Certificate of Education examinations at Nyankhwali Community Day Secondary School in Nsanje district.

Ruth is a beneficiary of bursary under the Constituency Development Fund (CDF).

“When I was in Form 1, my parents could not afford to pay K7, 500 school fees and I dropped out. They rely on farming for a living but things did not go well this year with the climate shocks that had hit the country,” Ruth said.

Vision of the third born daughter to become a nurse turned darker when she dropped out school but with the bursary scheme, “I now see it clearly that one day I will become what I want to be.”

Bursary is one of areas which young people in Nsanje and Chikwawa districts are benefiting from the UNICEF’s supported Child and Youth Friendly Communities Initiative (CYFCI) being implemented by the Development Communication Trust (DCT).

Through it, young people formed children corners where they discuss issues that affect them and take them to authorities for solutions.

Chairperson of Ndiola Children’s Corner where Ruth is a member, Finiyas Veleya, says a number of areas have improved courtesy of the Initiative.

He says they take issues “that concern us to Village Development Committees (VDCs) which together with traditional leaders take them further to relevant authorities for solutions.

“There were only 9 teachers at Ndiola Primary School who were few comparing to the number of students. This compromised lessons. After intervention, we now have 14 teachers. This is evidence of changes that the children’s corner is bringing because we raised the issues to relevant authorities who intervened and brought us more teachers.

“We now have the opportunity to give a voice in development planning and things are improving. Previously, teachers used a classroom as an office and that affected learning among the students.

“We raised that concern and an office is now under construction with funds from CDF. Very soon, it will be operational and students will go back to their classroom,” he said.

Veleya says they have also benefitted in health service delivery.

“We used to walk about 5 kilometers to access medical services at Tengani Health Center. We raised that issue and now we have mobile clinics. We are now able to access health services within reach,” he said.

The Corner also offers functional literacy education where 20-year-old Alfred Emmanuel is benefiting despite his disability.

Veleya says “it is important to include young people with disability such as Emanuel in our activities. They should not be discriminated because of their disability.

“They need to be treated just like anyone else. That is why we took him aboard to be receiving education and participate in decision making processes. He is able to follow development activities in the area and he is aware of his rights.”

As for Emmanuel, the initiative is a gamechanger as he feels “included in decision making processes. I feel good to interact with friends during our meetings.”

Headteacher for Rabu Catholic Primary School in Chikwawa district, Gregory Madeya, says “the school is following what learners present as challenges impinging their right to education.

“For example, they cited lack of change rooms for menstruating girls as a challenge to them because most them choose not to go to school when menstruating. We took that up and now we have a change room for them.”

DCT Executive Director, Prince Mtelera, says “when we engage children in decision making processes, we are going to get the development and the needs that are child centric and child-initiated development activities.

“By nature of our communities in patriarchal system, children are not supposed to come any nearer to where decisions are made. That goes even to the district councils, to the VDCs and to the area development committees. So, this project has come to shift that kind of thinking to allow children to participate in all process of decision making.”