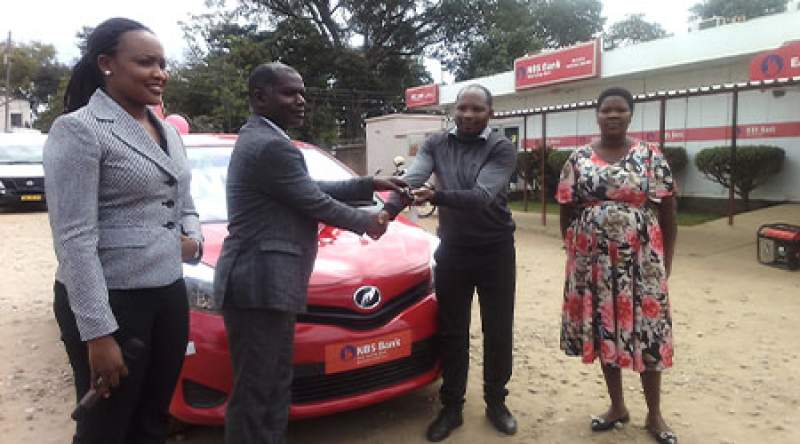 Mngoli presenting the keys to Sandram - pic by Mathias Mkupasha

A Science teacher of Mpilisi Community Day Secondary School in Balaka district, Humphrey Sandram, has won the grand prize of Toyota Vitz in the NBS Bank “Win a Car Promotion.”

Receiving his prize, on Tuesday 23rd August 2022 at NBS service centre in Balaka, Sandram hailed the bank for its commitment in uplifting the lives of its customers.

Sandram says the car is a blessing to his family as he did not had plans to buy a car.

’The car is a blessing as I will use it as a domestic vehicle. I had no plans to buy a car,’’ Sandram said.

Sandram says he joined the promotion through frequent depositing K50, 000 he earned from his small-scale business.

Meanwhile, the Bank's Head of Marketing and Customer Experience, Tamanda Longwe, said the bank will continue supporting the wellbeing of its customers as one way of showing corporate social responsibility through such promotions.

“We are all over the country, cities and districts people are able to win from our competitions,’’ Longwe said.

Longwe says she was pleased to see more customers participating in the competition amid economic hardships.

In his remarks, Balaka District Commissioner Darwin Mngoli has asked the citizens to keep their money in banks for their safety.