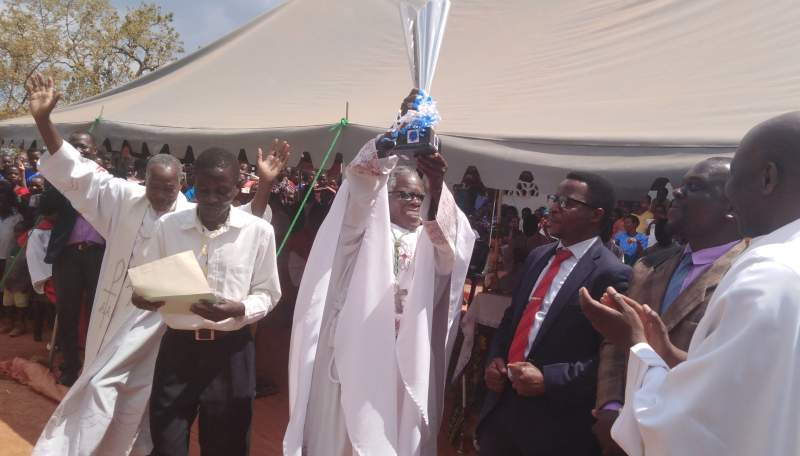 Musikuwa presenting money and a medal to the outstanding school - Picture: Luka Beston

Right Reverend Peter Musikuwa, Bishop of Chikwawa Diocese has urged Malawians to stop being wasteful on resources entrusted to manage by God or donors for the country to develop.

Speaking to Zodiak Online on Saturday, Bishop Musikuwa, while challenging public servants to uphold integrity, said the country is endowed with plenty of resources but are being wasted by selfish individuals in various positions.

He said this at Chikumba Catholic Primary School in Thyolo which Chikwawa diocese has awarded K200, 000 for achieving 100 percent pass rate in the 2021 Primary School Leaving Certificate of Education (PSLCE) with Bangula and Belewu coming second and third, taking home K150, 000 and K100, 000 respectively.

"I would like to remind those in authority that being in authority is a big responsibility before God and the people. So whatever we have received either from people around in the community or donors we are supposed to utilise them accordingly for the wellbeing of people not an individual," he said.

He also bemoaned early marriages and teen pregnancies which he said are very common in Thyolo and need to be checked.

Chikumba Catholic Primary School Headteacher Christopher Nasenya has decried shortage of classroom blocks at the school, adding learners are accessing education in a dangerous environment where there is no borehole.

"I can tell you that though we are the best school in the district and the diocese, we are drinking water with livestock. We have no borehole. We also have inadequate enough classroom blocks to accommodate all our learners.  We have many open classes," Nasenya lamented.

The diocese's education commission coordinator Geoffrey Mdala said, Bangula and Belewu Primary Schools came second and third, but were ranked position one in Nsanje and Chikwawa districts, the same as Chikumba in Thyolo.

Mdala announced that this will be an annual arrangement in the diocese.