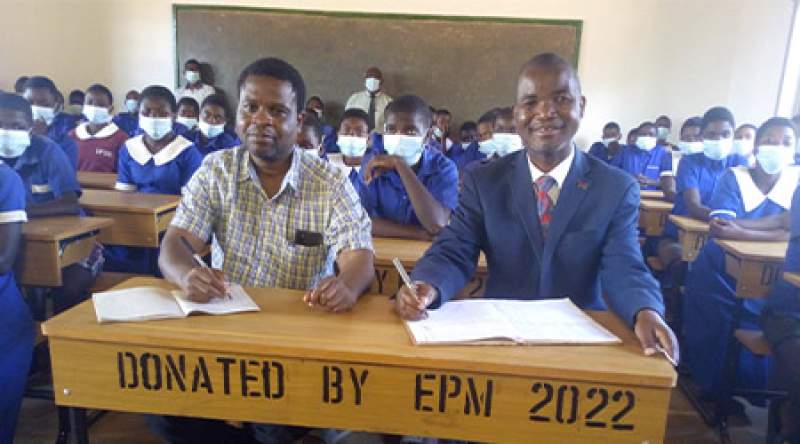 Education authorities in Mulanje district have disclosed that shortage of desks is one of the challenges that have hit most primary schools in the district.

Chief Education Officer at Mulanje District Council Cryton Tambala estimated that in every eight classrooms, only one classroom has desks and this, he says is an indication that the need for desks in the district cannot be overemphasized.

He spoke on Thursday when a tea growing company, Eastern Produce Malawi Limited handed over sixty desks to Chigombe and Lichenya Primary Schools.

“What EPM has done today is a clear indication that they are our partners in education, in fact they have been supporting us in different areas including constructing and rehabilitating classrooms and staff houses and as government we cherish the support you give us,” said Tambala.

Echoing Tambala’s sentiments, head teacher of Lichenya Primary School Andrew Kaledzera said out of 405 learners at his school, they have 43 desks.

“Previously we had 23 desks and with the 20 desks we have received from EPM, now we have 43 and we promise to take care of these desks as that is the only way of showing “thank you” to the company,” said Kaledzera.

A standard seven girl at Chigombe Primary School Cecilia Kamuzu told Zodiak Online that sitting on the floor was a serious challenge to her and her fellow girls especially when standing and sitting down and now with these desks, this problem has been solved.

“All I can say is thank you to EPM and I urge you to continue supporting us and neighoring schools,” said Cecilia.

EPM Corporate Affairs Manager Rabson Kachilele told Zodiak Online that the company believes that by investing in education, it is contributing to socio-economic development of the community around the company.

“Education is one of the pillars of EPMs Corporate Social Responsibility (CSR) and we are proud to be associated with the development of education sector in Mulanje and Thyolo districts where EPM is operating,” said Kachilele.

40 desks have been handed to Chigombe primary school while Lichenya has received 20 desks and according to Kachilele, the value of the desks is six million kwacha.