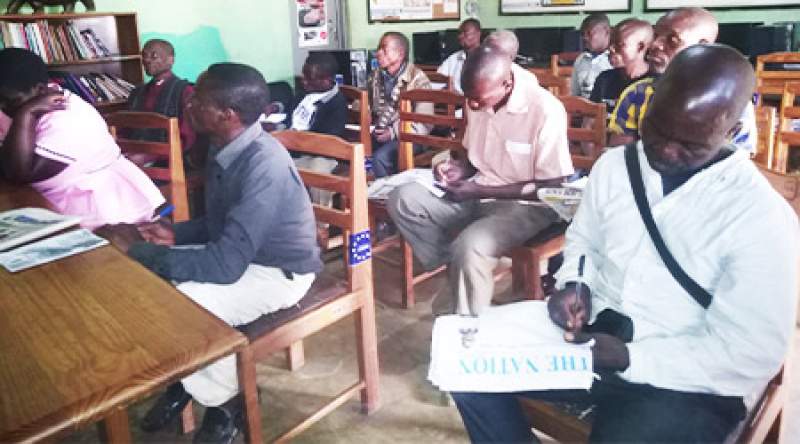 Some of the volunteers/ duty bearers - pic by Luka Beston

Local civic education volunteers in Thyolo have been challenged to help communities understand judicial process including police and court bails.

Thyolo Police Victim Support Unit Coordinator Chrissy Khoviwa and Legal Aid Bureau officer Prisca Masumba explained that lack of understanding that the suspects have the right to police and conditional court bails, is contributing to growing incidents of mob justice.

Khoviwa said: "What mostly happen is that when police arrest a suspect,  relations would want them to be released even before police have done investigations. So it appears if they get someone who is desperate for the money, would take take advantage of that."

"People should know that everybody has the right to police or court bail included in the Constitution though not absolute", Masumba added.

On his part, Thyolo District Civic Education Officer for NICE Trust Moses Kaunda says most communities do not understand why police or courts quickly grant bails to suspects worst still in situations where cases even discontinue.

"Communities do not understand when suspect has been released on bail, in most cases they think that's the end of the case. Some also wonder why police bail which is free people do pay.

"But we think what is supposed to be done is to sensitize the communities to understand the court processes and how other justice agenies operate", he said.

One of the volunteers for Luchenza Municipality Bester Maseko says the meeting has been an eye opener mostly on sticky issues that prompt locals to think money has exchanged hands on their cases, such as bail insuance.

This came out on Friday during sensitisation meeting for NICE Trust Area Civic Education Coordinators (ACEC) on access to justice to vulnerable groups under the Chilungamo Programme.

During the meeting, police reported that women and children continue to suffer gender based violence in the district, especially those whose husbands are in South Africa as their relations grab property over infidelity accusations.