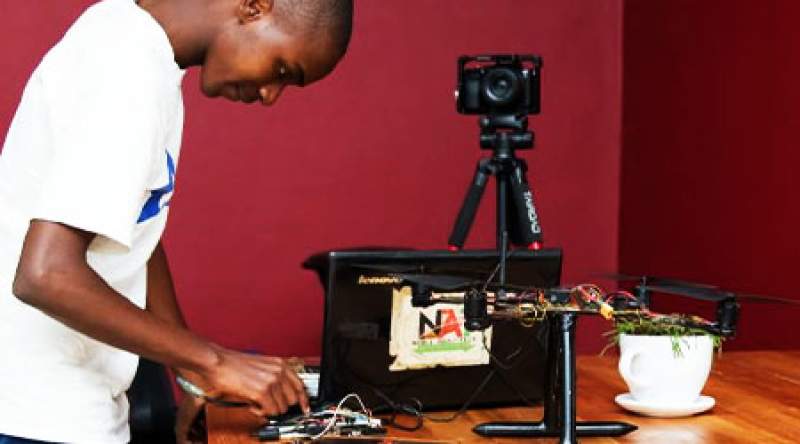 Save the Children has helped Evans Banda, an 18-year-old innovator, to secure a partial scholarship to study Aerospace Engineering in India.

Evans has secured the scholarship for after displaying his idea at the organization’s Creative Innovation Advisory Group that is helping build and promote creative innovation among young people.

“I am thankful to Save the Children for connecting me to an organization that has secured a 60 per cent scholarship for me to realize my dreams,” said Evans.

Through the group, Save the Children blends the skills, experiences and aspirations of the creatives with its pool of expertise obtained from over one hundred years of working with and resourcing for children to advance creativity and innovation that creates value and impact for children and the youth.

Evans has passion for aerospace engineering.

He was born and raised by underprivileged family in the rural part of Lilongwe district.

His interest in electronics began while learning a science subject in grade 8. The partial knowledge he acquired ignited his interest to discover more.

This then led him to begin extracting motors from discarded gadgets like CD-ROMS. He was 13 years old by then.

“After a month of extracting and experimenting with motors, I built a small vacuum cleaner. I later stumbled upon a dragonfly hand-push toy propeller that his friend bought.

“From observing how the toy operated, I thought it could fly further and for much longer if he used a motor on it. I attempted to fly the hand propeller using a motor and it flew on his first attempt, but only at a low altitude,” he said.

Through further research on the internet, Evans discovered that his earlier project could be refined further and he could build a drone.

The resources needed to build a drone as manufacturers do were hard to come by, but Evans did not allow this to shatter his dreams.

“I decided to use low-cost readily available materials like a plastic pipe, a dragonfly propeller, four motors, seal tape, glue, cardboard, a laptop charger, connecting wires, and a small pipe from a pen. After assembling the materials into something that could fly, I launched it into the air but on the first attempt, it did not fly.

“After several attempts, the gadget flew but it still had some deficiencies. I was then driven to inquire from aviation experts on how he could make his drone effective,” said Evans.

“As I was watching a program called Cruise Five on Zodiak TV, I saw captain Hastings Jailosi who is the head of department of civil aviation being interviewed. In that interview, they took a flight. I was so curious to learn more because I had never taken an aero plane flight in my life,” he said.

In 2021, through Captain Hastings of the civil aviation department, Evans was introduced to engineers from Kamuzu International Airport and instructors from Africa Drone Academy.

The experts helped him refine the drone and this time, after it was launched, it flew for over 15 minutes at an altitude of 50 meters. This was much better than his first attempt where the drone flew at an altitude of less than a metre. He has since upgraded this version but is to launch it

Evans has been selected to study Geoformation Earth Observation at the Malawi University of Science and Technology.

While this is exciting for him, his dream to study Aerospace Engineering still lingered. His innovation journey has now taken an exciting turn as he has connected with Save the Children.