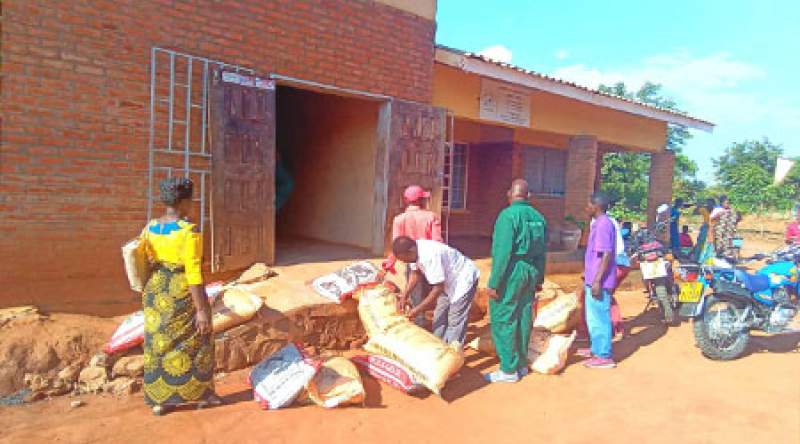 A snap check by Zodiak in Neno has established that only two traditional authorities of Mlauli and Chekucheku have AIP selling points, putting a burden to other beneficiaries from Senior chiefs Symon and Dambe.

This scenario is pushing people to spend more on transport for both themselves and the affordable farm inputs.

For example, James Iyamu, from the area of Senior chief Dambe traveled to Neno Boma for the inputs, spending K7,000 on one trip.

"We are appealing to government to assist us with more selling points and ensure that the network is not interrupted at anytime, since our maize is almost at the level of applying fertilizer", he said.

Shifting to Ligowe selling point, the market is often dry. For example, for two days now, the market has no fertilizer, pushing the beneficiaries to Neno Boma, a distance of 20 kilometres and bracing the muddy road.

Once at the Boma the supply is good but with everlasting network challenges.

Chipiliro John from Donda village confides to us that he has been spending hours at the Small Holder Farmer Fertilizer Revolving Fund of Malawi ( SFFRFM) depot as network is often down.

"Here the supply is good and SFFRFM is doing all it can to ensure continued suppy of the commodities but we appeal for experts to assist us with network, it's not on", he appealed.

Road network has already started showing its fruits, with two trucks spending a night at Ligowe due to muddy road leading to the Boma.

But Neno district acting Agriculture Development Officer (DADO) Mayamiko Diana Zambezi has admitted to the challenges saying her office has already started mobile selling of the inputs, starting with Kanono village in the area of senior chief Symon.
"We are trying to make sure that all beneficiaries should have  access to inputs as soon as possible since the district is now receiving rains. The mobile vending will be intensified", she said.
She adds that, currently they are devising mechanisms for use in coverage all hard to reach areas of the district, citing they will become impassable especially now that the rains are in.

He says as a CSO network, they have noted poor network, availability of one type of fertilizer, people sleeping at selling points and current heavy rains as challenges which need urgent address if the program is to bear fruits.

"People are queuing for a long time for the products, other villages are being returned, which is a great concern to us as civil society organisations, so we asking the government to help us out",. Narrated Njolomole.

While commending the Tonse led administration, he however cautions it on the condition of the Neno road, saying is an obstacle to the success of the program, and needs urgent attention.

People from the area of senior chief Symon are also flocking to the Boma for the products, with the elderly people feeling the heavy pain.