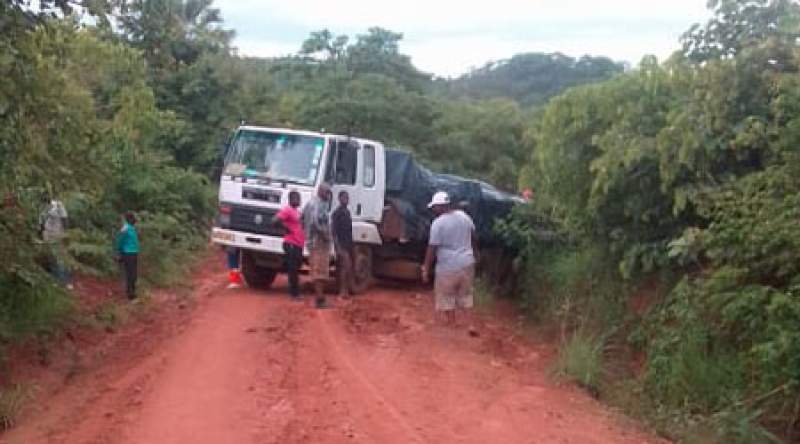 A truck carrying some goods destined for Neno Boma on Monday blocked the road at Asumi, preventing vehicles such as ambulances from entering and leaving the district which has had no tarmac road since time immemorial.

A community member, John Mangule, told Zodiak Online that authorities should address the road problem once and for all.

"Priority should be given to us the people of Neno. 20 years of being a district but without a road is uncalled for," he said.

Member of Parliament for Neno North Constituency, Thoko Tembo, earlier told Zodiak Online that the road construction will resume soon, saying issues of fuel scarcity and quarry mining licence were some of the challenges but they have been sorted.

"We had a few issues to do with the contractor, that is he wanted a mining license for quarry which has been sorted and fuel scarcity also played a role, but it's my priority to see this road taking Sharpe", commented Tembo.

Another truck carrying the Affordable Inputs Program fertilizer is also stuck at Asumi in the district destined for Chikonde SFFRFM depot which has exhausted its stock.

Group village headman Wilimu is expressing worry over the incident, saying his subjects are being subjected to undue stress hence a call for a swift action.

He says, government should have used the Malawi Defence Force trucks which are currently ferrying the inputs to hard to reach areas, to also come to Neno earlier.

"Our district becomes impassable during the rainy season and this is not new to government, they should have made strategies that would have prevented this, our people might end up having hunger", warned the village headman.

These sentiments are being echoed by Aonenji Jawadu, who says she has stayed at the AIP selling depot for three days now, worrying about her maize garden which is fast passing the time of fertilizer application.

As a relief, member of parliament for Neno North constituency, Thoko Tembo has provided fuel assistance to the Agriculture office and Small Holder Farmer Fertilizer Revolving Fund of Malawi to use in recording beneficiaries’ IDs for mobile marketing strategy.

He says the move is to improve sales of the inputs by taking them close to the people using mobile markets.

Tembo further encourages the beneficiaries to report any malpractice by authorities while advising them to take advantage of the mobile markets.