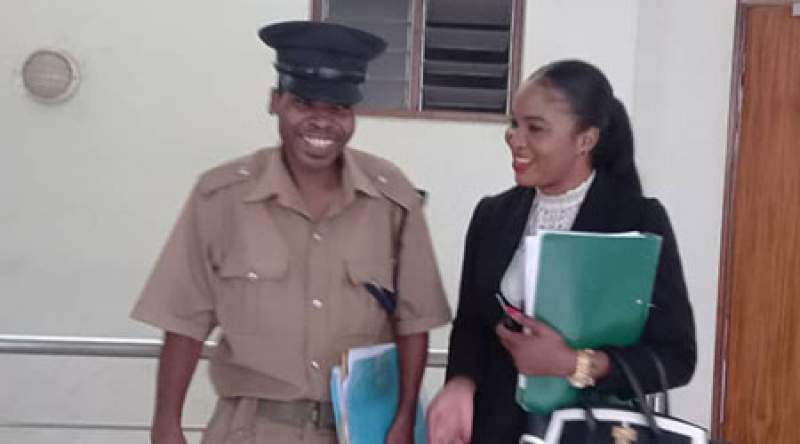 The senior resident magistrate’s court in Blantyre has started hearing a case which an environmental activist, Godfrey Mfiti, is being accused of defrauding Jacqueline Makiyi.

Makiyi is one of women who were compensated by Camellia Group, a UK based firm, for sexual abuse they suffered at Mapingo tea estate in Thyolo in 2021.

State witness, Chikondi Chijozi, told the court that she was contracted by the UK based law firm, Leigh Day, to investigate the allegation.

According to her, Mfiti offered himself to assist the victim with the process to manage the compensation of about K15 million and build her a house because the victim does not read nor write.

In her evidence, Chijozi said Mfiti used the victim to thumb print cash withdrawal slips to withdraw the money and gave him for the house project.

“He started building the house which is in a bad state and not fit for human dwelling. I took pictures using my phone for Leigh Day,” she said.

Chijozi added that the matter entered mediation where the suspect admitted to have taken the money “but wouldn’t be certain as to how much.

“He agreed that he will finish building the house and ascertain how much it has cost and then pays back the balance,” she said.

She said that it was later realized that the suspect was not true to his words and the matter was reported to fiscal police.

In cross examination, lawyer for the accused, Hanif Aufi, asked Chijozi is she was present when the suspect was getting the money from the victim and she replied that she was not.

She was also asked whether she found any structure being built at Makiyi’s home, of which she responded that “I found uncompleted structure.”

On whether all the avenues to resolve the matter before reporting to police were exhausted, Chijozi replied that the mediation failed and so it was resolved to take the criminal proceedings.

In her testimony, Makiyi told the court that part of the money withdrawn was used to buy items such as 30 iron sheets, 2 hoes, glasses, mattress, 10 bags of cement and buckets.

In cross examination, Makiyi told the court that she does not know how much she received as compensation, neither does she know how much the accused swindled.

When she was asked whether she has evidence that the accused was getting money from her after the withdrawal, Makiyi said she has it but she did not produce it in court.

State prosecutor Henry Chitandale has amended the charge sheet by substituting the amount of the money to “unspecified amount” and the matter has since been adjourned to 27 January, 2022.