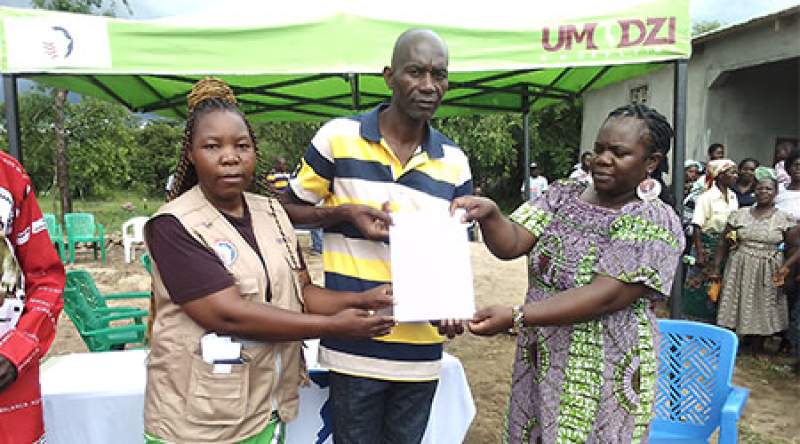 The United States Africa Development Foundation (USADF) has given an agribusiness grant of K120 million to Nchena Livestock Corporative Limited in a bid to improve their income and healthy, especially in people with Non- Communicable Diseases (NCDs) in Neno.

The grant is part of a United States based charitable trust, Hemsley, that is meant to improve the livelihoods of the people on NCD treatment.

USADF Country Programs Coordinator Linda Ndovie Jere while handing over the grant today, says the sole aim of the grants is to reassure the people with NCDs that they can still be productive, support their families and improve their diets while on treatment.

She says people on NCDs who are still fit can still contribute to the improvement of their diets and that of their families.

"We hope the people will use this grant in their agribusiness of pig, goat and chicken farming besides having a vegetable farm," she said.

She then asked the group to avoid disagreements within themselves and focus in rebuilding their lives while taking care of any money used through correct and timely auditing.

In his remarks, Nchena Livestock Corporative Limited secretary Yonas Katema, thanked Umodzi Consulting, a group working with USADF in Neno for linking them to USADF adding the money will be used in poultry and vegetable farming for its 166 membership.

"We will ensure that we benefit from this grant and adhere to all the conditions given. We will also use right chemicals and dispose them rightly as advised by our Extension workers to protect our environment", assured the secretary.

The group also intends to plant 1, 220 tree seedlings as a way of conserving the environment and go away with charcoal business that has depleted almost 24, 000 hectares of trees in the entire district.

The group has 28 members suffering from Non-communicable diseases and it has secured a 2.5-hectare land in the area of group village headwoman Mbemba, in the area of Senior Chief Symon.

One condition to the grants, according to Hemsley Charitable Trust President, Travis Adkins is that the corporative should not use the money on any drug and substance abuse around the offices or in their fields.

She then asked for collaboration between different stakeholders if the grant is to serve its purpose.

The K120 million grant is to be used from this year up to 2024 as part of governments program on Livelihoods Improvement.