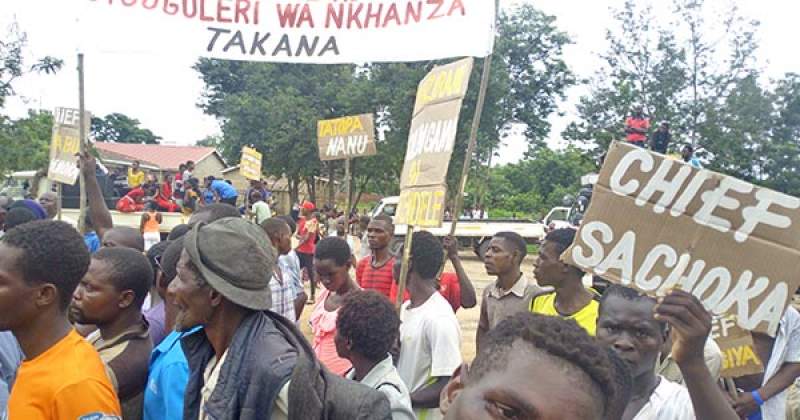 Hundreds of people from Ngabu area in Chikwawa district on Tuesday stormed the district council offices to present a petition in which they are demanding that President Peter Mutharika should re-instate Senior Chief Ngabu.

Some of the key points in the petition included failure by the commission of inquiry set by President Mutharika to engage the royal family  and Ngabu himself.

The petitioners also argue that the allegations levelled against Ngabu were minor and that Paramount Chief Lundu should stop interfering in Ngabu's chieftaincy.

Group Village Headman Khokhwa told us that their chief was unfairly dismissed and government pace in acting on the matter was supersonic including the on-going process to replace the dethroned senior chief Ngabu.

District Commissioner Ali Phiri assured the demonstrators that he would ensure the petition is delivered to the president Tuesday.

“I thank you for maintaining peace on your way from Ngabu to my office. I will send the petition to the President today,” said DC Phiri.

The president made this decision following recommendations from the commission of inquiry conducted in August 2019, as some people in the area accused the chief of corruption and land grabbing, allegations the chief denies.

Factory to Process Vertiver Into Essential Oils Opens in Nkhotakota

A factory that will be processing Vertiver into essential oils,…
Read more...

One of the country’s major Real Estate and property managing…
Read more...

Department of National Parks and Wildlife in Malawi says all…
Read more...
Subscribe to this RSS feed