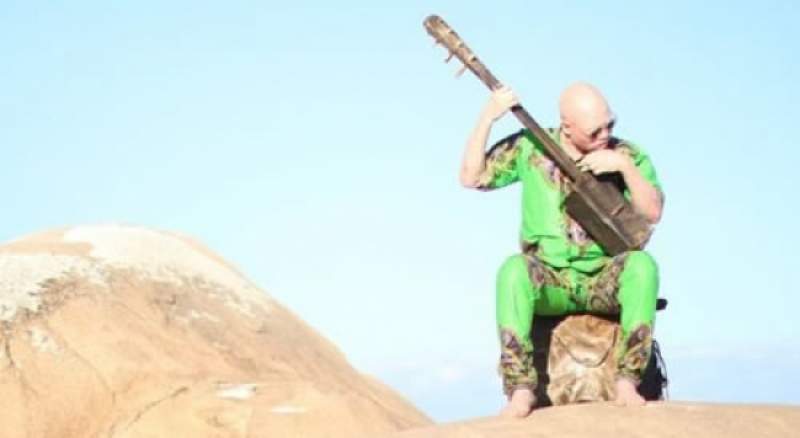 From the crowded streets of Lilongwe, a busker named Lazarus Chigwandali has risen to challenge the myths and superstitions about people with albinism.

Malawi is home to an estimated 10,000 albinos - a condition that affects the production of the pigment that gives skin, hair and eyes their colour.

But a widely-held belief that their body parts can impart wealth or good luck means people with albinism are frequently abducted, murdered or mutilated in East Africa. Others are raped due to a myth that sex with an albino can cure HIV.

Growing up in Nankumba village, 50 miles south of Malawi's capital, Lazarus was subjected to violence and marginalisation first-hand.

"People would come and beat me up for no reason," he tells the BBC. "Even when I was walking around the village, people would just throw stones at me.

"If I went to see a soccer match, people would stop playing and leave the field because they didn't want to associate with me."

Life was tough, but solace came through church and music - particularly the songs he wrote and played with his younger brother, Peter, on a makeshift guitar.

"We used to sit down and compose songs about life in the village," he recalls.

"One of them was about these parents who'd let their kids do whatever they want, like steal and gamble - so we wrote a song to try and let the parents know this was the wrong way. You need to tell your kids not to act like this.

"And all the women in the village, when they go to draw water, they were talking like, 'These two boys are amazing, they're singing this song, they're teaching us how to parent our kids.”

The brothers suddenly found themselves in the odd position of being embraced by the same people who had once shunned them. They were invited to weddings and christenings, where they would make up songs on the spot about the celebrations.

"People loved it," he says. But their career came to a tragic end when Peter developed skin cancer, a common but devastating condition for people with albinism.

When Peter died, Lazarus left the village for Lilongwe, where he would busk on the streets for small change. It was not an easy living.

"We used to sleep on rags and we struggled to get enough to eat," he says. "My wife would tell me, 'This is not a good family we're having here.'"

But he remained upbeat. One of the songs he'd play on the streets was called Stomp on the Devil - a message to Satan that "no matter how miserable you try to make me, I will survive".

It was this song that caught the eye of an English tourist, who took out her phone and filmed Lazarus performing in a shopping centre.

Her video eventually made its way to Johan Hugo, a Swedish-born, London-based musician who has worked with Lana Del Rey, MIA, Baaba Maal and Mumford & Sons.

"He was playing this kind of punk rock version of traditional music on his banjo, which I really, really liked," the producer recalls.

"I thought instantly I would love to produce a record for him."

Hugo called Malawian singer Esau Mwamwaya, with whom he has made several albums under the name The Very Best, and together they set about tracking Lazarus down.

A mutual friend, Spiwe Zulu, happened to have the musician's number, and together they agreed to record an album - but days before they were due to start, Lazarus went missing.

"We completely lost contact," Hugo recalls. "And it was Esau's wife who said, 'Maybe he's scared and thinks this is some very elaborate kidnapping attempt.

"We hadn't even thought of that, being as naïve as we were, but that's exactly what it was. He'd taken his family and gone to his home village thinking that something was about to go down."

Once Spiwe managed to reassure the musician that Hugo and Mwamwaya were trustworthy, a makeshift recording studio was set up in an AirB&B complex in Lilongwe, with additional recording taking place in the streets where Lazarus first learned to play.

"We did it right in front of his house," Hugo recalls. "There were 100 kids and people singing along and clapping and doing the washing and cooking - so it's like the song gets flavoured by the surrounding area."

Lazarus says: "For my family, it was one of the biggest moments in our lives. People could not believe how they used to see me walking down the streets and busking, and now there were producers and film-makers recording these songs at my place. It was the most amazing feeling."

The first single from the sessions was released earlier this year. Called Ndife Alendo (We Are Strangers), it talks about how we are all visitors on Earth, who will one day return home to Heaven. But it is also a metaphor for the plight of people with albinism.

"We are treated as if we are visitors in their own land," the singer explains. "So I'm telling people, 'We are human beings, just like you.'"

Ndife Alendo has become a radio hit not just in Malawi, but in the UK - where Jo Whiley and Lauren Laverne have championed Lazarus on BBC Radio 2 and 6 Music.

"Lazarus is a great pop songwriter," observes Hugo. "His melody, his way of singing, his hooks, it's all very poppy - but at the same time it's so traditional and raw and energetic and he combines it all in a way I haven't really heard before."

Lazarus says the acclaim for his music has been life-changing.

"Before this, I wanted to jump into the highway and have a car smash me and kill me," says the 37-year-old.

"But right now, I'm happy that the whole world - and Malawians especially - are listening to what I'm saying in the music."

Hugo says the musician is in a "unique position" of being able to dismantle cultural stereotypes about albinism.

"And it's already happening... He's really becoming a star. He's done all the TV shows, he's been invited to the US embassy, there's going to be a tour.

"So you can see people really rallying behind him, and the cause of people with albinism."

The message will spread even further when a documentary about Lazarus's life premieres at the Tribeca Film Festival in New York this weekend.

It has been produced by Madonna, who has championed the musician in his home country, inviting him to share a stage with her at an open-air concert last year.

"I was so surprised that Madonna, who is a popular, well-known person the whole world over, was such a nice person," he says. "After I met her, it took me some time to get to sleep, because I couldn't believe it!"

The encounter also opened his eyes to the potential for his music to reach a global audience.

"I would love my songs to become as popular as Madonna's," he laughs.

"If that ever happens, I'll spend a whole day in my house just dancing!"