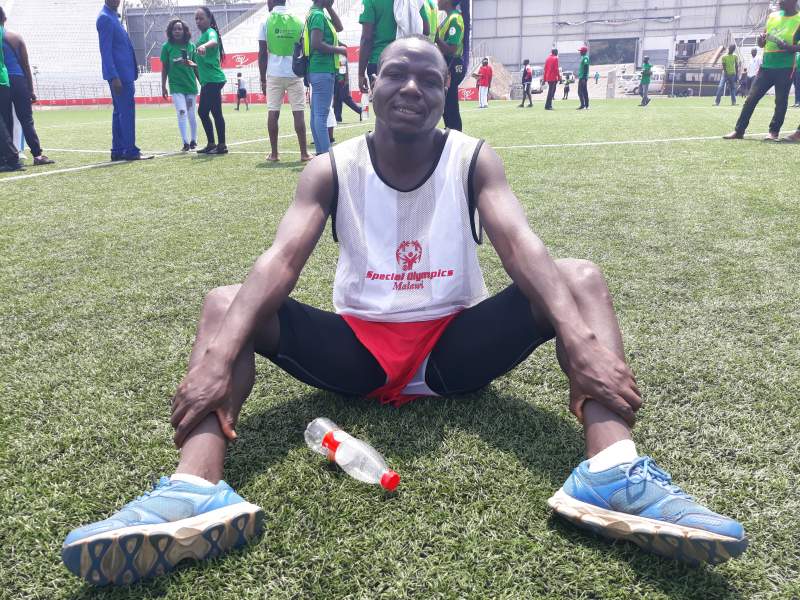 Samuel Mbukwa developed Intellectual Disability when he was five years old after suffering from cerebral malaria. He is now 32.

He comes from Kameme in Chitipa district. As a child, he used to run every time he travels. No matter how long the distance used to be, he ran.

People thought Samuel’s strange behavior was a causally related to his intellectual illness; little did they know they were raising an athlete within.

“I started running when I was only 6. I was running to and fro school; whenever my parents sent me anywhere, I ran. I did not use bicycle or any ride. My body got used and I told myself I should start taking part in athletics,” he said.

His father, Tenson Mbukwa, said that “in his [Samuel] childhood days, he was full of running. People were connecting his behavior to his mental illness. They were saying my boy was mad but everyone in our family believed in Samuel. We kept encouraging him to concentrate on his gift. I believe it is a gift from God and I know he will go places.”

Today, Samuel is an icon for Special Olympics Malawi. In 2017, he finished seventh in a half marathon competition where 138 athletes competed. In October this year, Sam travelled from Chitipa to compete in a 42.2 kilometer Blantyre City Full Marathon in Malawi’s commercial city of Blantyre. He finished on position 22. He was the only athlete with disability in a 46 member contest. Beating 24 athletes was not an easy task for Sam.

“I eyed first position but I had no trainer. I trained on my own in preparation for this marathon. As part of preparations, what I did was just to be running to everywhere I had to go as part of training.

“If I had a chance to have a trainer, especially here in Blantyre, trust me I could not have finished on position 22. I could have done better but I am happy that I have beaten a number of abled athletes,” said Samuel.

In his message on the International Day of Persons with Disabilities on 3rd December, 2018, Secretary General of the United Nations, António Guterres said that “the UN Flagship Report on Disability and Development 2018 – Realizing the SDGs by, for and with persons with disabilities shows that people with disabilities are at a disadvantage regarding most Sustainable Development Goals, but also highlights the growing number of good practices that can create a more inclusive society in which they can live independently.”

Denying Samuel an opportunity to show his capability, just like any other person, is probably what Mr. Guterres referred to here; putting Samuel at a disadvantage regarding most SDGs, especially SDG 10.

“Other countries send people with disabilities to participate in international Olympic Games. In Zambia, Kenya and other countries, people go. Why not me? Why doesn’t our country send me as well? It always baffles me,” said the worrying athlete, Samuel.

Samuel pleaded with authorities in the country to support people with disabilities like him to take part in various sporting activities.

“You should not create a divide between us people with disabilities and the abled friends when implementing various sports projects. You should support everyone regardless of our physical or mental conditions. We all have to enjoy our rights equally,” he pleaded.

By venturing into Special Olympics, Samuel thought that was one of ways to have his ends met. Oh yes; that was his thinking. If the country takes the SDGs at heart, the nation would surely support him in his quest to achieve Goal 10 of the SGDs that calls for nations to, by 2030, reduce income inequalities.

“The country must give chance to people like Samuel. We need resources and more competitions for these people and their abled colleagues to remove the barriers that people with Intellectual Disability (ID) face.

“Look at Samuel; he is the only athlete with ID who has taken part in this marathon. He has done this to spearhead the name of Special Olympics. People should know that there is also Intellectual Disability, not only physical disability,” she said.

Malawi is a signatory of many treaties and conventions in respect to protect rights of everyone regardless gender, race or ability. People like Samuel must be accorded opportunity to enjoy quality participation in physical activity and sport just like any other person.

Dr. Charles Masulani Mwale, Chief Executive Officer of Saint John of God Hospital says the other way to improve mental health of people with intellectual disability “is to involve them in sporting activities.”

Director of sports in the ministry of sports, Jameson Ndalama, says he has been motivated by Samuel’s spirit for finishing his 42.2 kilometer race, saying his ministry will review its policies.

“As a ministry, we will encourage more persons with ID to take part in various activities. Our National Sports Policy has a clause that calls for promotion of sports among persons with disabilities, women and others. We are working on our sports facilities to be disability friendly as well,” said Ndalama.

While sport has value in everyone’s life, it is even more important in the life of a person with Intellectual Disability like Samuel Mbukwa. Sport is a therapy.