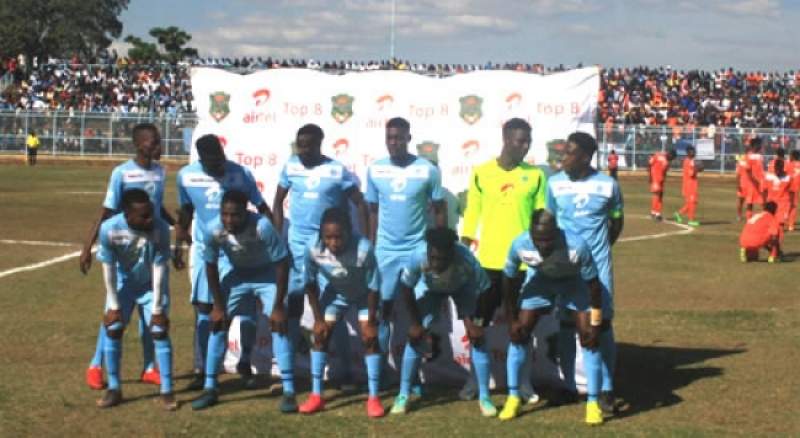 The Bankers. - Pic by Tione Andsen

The Derby was scheduled to be played on Sunday last weekend June 2, 2019 but Super League of Malawi (SULOM) made changes to the TNM Super League fixtures for week six of the season.

SULOM said all the games were postponed due to security reasons as the country had witnessed a lot of political violence as a result of the announcement of Presidential Elections results particularly in some part of the central region districts of the country.

The Sunday encounter will be played with Civil Sporting holding the bragging rights of the City following their last season’s surprise win over their rivals, the Central Bankers through a 1-2 beating that dented their hopes for the title chase.

The Central Bankers have won against Karonga United 2-3 in Karonga and Mzuni 2-1 at Silver, drawn with Chitipa United 0-0 in Karonga, Masters Security 0-0 in Dedza and lost to Kamuzu Barracks 0-1 at their own back yard.

The Area 9 outfit, Civil, had a brilliant start of the season where they recorded 100 percent winning record for the first three games they played.

Civil travelled to southern region where they faced Mighty Tigers in Mulanje where their 100 percent winning record was put to a stop with a 1-0 defeat.

This means Civil have only won three games and registered two loses and are yet to record a draw.

Both teams are meeting after testing defeats, Silver lost at home while Civil dropped six points away from home.

Silver will miss the services of the head coach, Lovemore Fazili, who is away with the national team in Durban, South Africa contesting in the 2019 COSAFA Plate.

The team will miss two key players, their first choice goalkeeper, Brighton Munthali and winger, Duncan Nyoni who are with the national squad and their striker, Khuda Muyaba who is currently on boycott.

Civil will miss the services of their injured right back, Damiano Kunje and two players loaned from Silver strikers, midfielder, Timothy Chitedze and goalkeeper, Blessings Kameza.

In the absence of Fazili, Silver Technical Director, Young Chimodzi will provide guidance to the team and identify appropriate players to replace the three missing ones.

Civil’s Coach Franco Ndawa will need to dig deep to find the replace of two loaned silver players for the encounter.

Silver Strikers’ Team Manager, Itaye Nundwe, said despite the absence of the two players they are geared to face Civil.

“They are our key players but since we have over 30 players in the team, we will be able to find rightful replacement,” he said.

Nundwe appealed to their supporters to come in their large numbers to provide much needed vocal support.

Civil sporting team manager, Gabriel Chirwa, admitted that it would be a tough game and derby matches have always been not be easy games for many years.

“We are keen to ensure that we should collect maximum points this time around and we need to forego the massacre we had last time in Blantyre we played Bullets. We are looking forward to a very interesting game on Sunday,” he said.