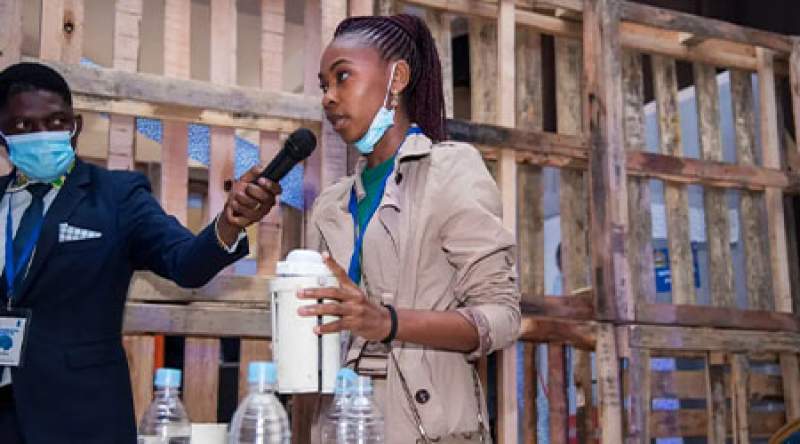 Zinchetera is about 12 killometers off Chipoka road block. To get to Malowa Community Day Secondary School, Fatsani covers over 12 killometers from Zinchetera to Chipoka Trading Center where the school is located.

Since the war in Ukraine, coupled with Covid-19 effects and natural disasters most economies especially developing ones like Malawi have struggled to keep prices of basic commodities, including fuel down. This includes paraffin which most poor people rely on for lighting.

In Malawi, Paraffin price has almost doubled from 833 Malawi Kwacha in April 2022 to 1230 Kwacha December 2022. Fatsani says that it is very difficult for students like her to study at night. She says that, mostly, she just briefly goes through the day’s work in a session that lasts not more than 30 minutes when she is cooking.

She says: “In the village like ours, it is very tough to study at night. Mostly, we take advantage of the lighting when cooking to just go through the day’s work. Once in a while, when there is money, our

parents buy batteries, so that we can use torches. But that doesn’t happen often.”

“So, when we want to study for examinations we have to utilize the time during the day. But it is also not easy, being a girl the household rely on you for household chores.”

Fatsani says that the study sessions when cooking are not most effective because she has to focus on three things. Firstly, the cooking as her

family expects of her preparing a well cooked meal. Secondly, she has to fight off the painful smoke in her eyes for both reading purposes and the cooking she is doing, and lastly and most important of all, she still has to maintain concentration in the reading to ensure that whatever she is reading at that time sinks in.

Other than that, excessive exposure to indoor smoke is not healthy. It is number one contributor of indoor pollution. A paper by Unicef in 2017 posted that air pollution is a growing menence, affecting poorest children like Fatsani the most. Although deaths from in door pollution have declined by about 15% since 1990, the overall number of deaths is still very high at over 400 000 in Africa in 2017.

A 2022 paper WHO states that Household air pollution was responsible for an estimated 3.2 million deaths per year in 2020, including over 237 000 deaths of children under the age of 5.

Fatsani hopes if the country could increase access to electricity to most rural areas. At the moment, in Malawi less than 10 percent of Malawi’s 18 million population is connected to the national power grid. And it is also estimated that, less than 5% are able to use alternative energy power sources like solar.

Banda who is studying chemical engineering at MUST, says that stories like that of Fatsani’s inspired her to come up with her innovation which she calls water lamp.

Banda says: “One time I remember I went to my home village in Malewule in Lunzu, where I saw people struggling at night. They could use two to three candles, kerosene lamps for them to get lighting. This means that someone in a village has to use more than 500 Kwacha using three candles a night a sum that is a lot for someone living in a village.”

Besides, Banda says that use of paraffin is not safe to both humans and environment.

“Burning things, or combusting things produces carbon dioxide. Carbon dioxide is a pollutant to the environment and people’s health. Although in small doses, but it can still impact your health. The more and more fumes you consume, these small, small doses add up to something,” she says.

What is Water Lamp?

Banda used basic chemistry knowledge of electrolysis (the process of using electricity to split water into hydrogen and oxygen) in developing her innovation, the water lamp.

She realized that using special type of metals, salt and water she can produce energy in form of a cell (a battery) which can light 6 volts’ bulb for more than three hours, and after four hours the light can dim down but the light can improve by just adding more salt and water.

The 6 volts’ light is enough to light a room which can have close to 10 students studying at night, or help hospitals in rural areas have a successful delivery in labour wards. She believes that once this

technology is fully completed and starts mass production it will benefit more rural areas in the country.

“I am determined to seeing this innovation reaching to the communities may be in a year or faster than that depending on availability of funds. I want to see this project implemented and not end up like a mere ambitious school project. Currently we are already working to improve the design to make it potable and easy to use in the communities. But we are just taking one step at a time,” she says.

In April this year, Banda was among 10 young innovators who exhibited their talents in Lilongwe during UN World Intellectual Property Day.

At the event Komatsubaru said: “UNDP is one of the leading agencies collaborating with different players in government, private sector and the innovation ecosystem to promote emerging and innovative entrepreneurs, who are key to Malawi’s economic growth.”

This goal is considered a nucleus of all goals, in such a way that,

One of the innovators who also exhibited his innovation is 28-year-old Zack Kalebu Mwale. Mwale is known in the country for making a number of innovations. Mwale is able to make locally made radio

transmitters among other things, and is also acknowledged for making first Malawian automated Nsima cooker.

In 2018, Mwale was an electronics and engineering first year student at the Malawi University of Business and Applied Sciences (MUBAS) but was withdrawn on academic backgrounds. He says his withdraw was due to the fact that, he was putting much of his efforts on innovations than he was putting on school.

At the exhibition, Mwale showcased his latest innovation water powered genset. Just using water as fuel, mwale’s innovation also caught the attention of the spectators. Using water, Mwale’s genset produces 5000 wats, 240 volts which he says is enough to power a house and do all urban household requirements like cooking, refrigeration, entertainment purposes and lighting for 8 – 12 hours.

The 5000 wats genset is also eco-friendly as it does not produce smoke, instead it releases steam which is released as a by-product after producing the energy.

Mwale’s innovation is complete and ready to use, however he says that currently is working on patenting it as well as finding potential investors to help in mass production project.

“Through patenting, I am looking to protect my innovation so that it should not be copied by other countries. it has always been very hard to secure patent in Malawi. For instance, other innovations that I have made before, it took me more than four to five years. And again, there are just so many stages which one has to go through. Such that it can put off investors,” he says.

Mwale added: “Nonetheless, I am happy that government and its partners like the UNDP have started showing interest in people like us (innovators). For instance, it is for the first time that the government has invited so many innovators in one place and tell us about the importance of intellectual rights. I am hopeful that government this government will help us.”

In every country innovators are protected by the state. The state puts in place mechanisms to ensure that innovation is encouraged and intellectual property rights are guaranteed. In Malawi, two years ago, the government launched the national intellectual property policy which is being implemented by the office of the registrar general.

But innovators like Zack Mwale says that there is too much bureaucracy, citing that it takes more than five years for innovators to secure patents.

Registrar Chikumbutso Namelo acknowledges that his office has not done enough.

“Those are some of the challenges, but the good thing is that there is a solution to that, that government wants to make our department autonomous so that we can be more active in granting intellectual rights.

We want to transform the department of the registrar general to be a statutory organization (intellectual property office). We are already working on a bill (companies and intellectual properties bill) which is at the principal secretary committee then it will go through the cabinet committee. Once the bill is tabled and passed it means that our office will not focus on registering political parties which is not our core mandate,” he explains.

Young Innovators like 23-year-old Angella Banda and 28-year-old Zack Mwale believe that the reforms which the office of the registrar general will represent a new beginning for Malawi in promoting innovation.

Banda wants her innovation to improve a number of sectors such as education (where people in rural areas fail to study at night because of lack of access to electricity), health (where hospitals spend huge sums of money an average of 300 000 Kwacha per hospital on buying fuel for backup power.

which demand expectant mothers to bring candles or torches during delivery.

Mwale believes that his genset innovation can revolutionalise the agriculture sector, being cost effective, running on water as fuel to spar irrigation in the country.