The agricultural sector has gotten a boost of over sixty graduates who have completed their studies at Mwimba College of Agriculture in Kasungu.

Written by Aunyago Nkhoma
Published in:News In Central Region
Subscribe to this RSS feed
Four people have been arrested in Dowa for allegedly attempting to steal cattle in the district.
Read more...
Tagged under: 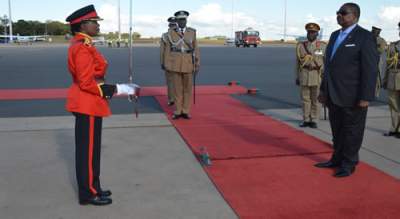 President Peter Mutharika has reiterated his wish for a round table discussion with leaders of opposition political parties on the current political impasse.

The Anti-Corruption Bureau has been given three days to arrest two individuals named in the alleged attempts to bribe constitutional court judges with the aim of having verdict in the presidential election case apparently swayed in favor of DPP candidate President Peter Mutharika.

In the wake of increasing maize insecurity at household level in the country, a senior traditional leader in Kasungu district has stopped his community from preparing communal meals during funerals in his area.

Police in Lilongwe have arrested three people suspected to have poisoned a Lilongwe based lady Kottana Chidyaonga.

Chidyaonga 23, died suddenly on 4th January this year due to what was said to be a snake bite as she was visiting one of her friends in Lilongwe.

But after medical investigations on the cause of Chidyaonga’s death, it has been established that she died due to acute poisoning from a pesticide called Termick.

This is according to a Forensic Autopsy Conducted by Pathologist Dr Charles Dzamalala which Zodiak has seen.

According to the Pathologist, the version of a snakebite lacks evidence as the wound on the deceased did not classify features of a snakebite.

Following the development, police in Lilongwe are keeping in their custody three suspects who are suspected to have had a hand in the death of Chidyaonga.

“We have arrested the suspects following the forensic medical report and charges have been placed against them,” he said.

One of the suspects Timothy Mtilosanje 28, who reportedly had an affair with the deceased hails from Mkungula Village T/A Kuntumanji in Zomba district and another suspect Gilbert Kamaliza, 29 comes from Mbamba village T/A Mkumpha in Likoma. The third suspect Diana Bhangwanji 23, from Khulira village T/A Thilamanja in Mulanje District was arrested at Kamuzu International Airport as she was leaving for the United Kingdom.

The death toll in the family where four people died suddenly and five others were hospitalized in Ntcheu district has now shot to seven compelling the department of disaster now to intervene.

Malawi expects to attain the 90-90-90 goal in the fight against HIV and Aids this year, a feat government says indicated the country has made tremendous progress.

Three children and their step-father died Tuesday in Ntcheu district while five others are admitted to the district hospital after they suddenly fell sick.