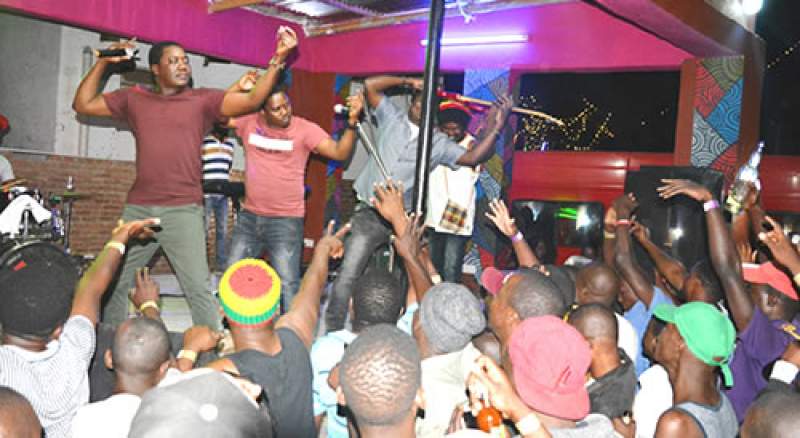 The Blacks in action - Pic by MANA

September 23: Zitherepano Club in Mangochi became a centre of attraction on Friday night as the Black Missionaries dished out its best performance to mark the Club’s 22nd anniversary.

The Chileka-based reggae band had their equipment set by 21:30 p.m with Khozi Masimbe raising the curtain followed by Yanjanani Chumbu who dished out different songs to keep the fans warm for the big act.

At every given opportunity throughout the show, Ras Peter Amidu, the band’s bassist, kept reminding the audience that politics should not be given room to divide the love that exists among Malawians.

The show gained momentum when Moda Fumulani got the mic and dished out different songs including those of his late brother, Gift.

This was the first time for Moda to perform in Mangochi since he reunited with the band.

The Blacks leader, Anjiru Fumulani, stormed the stage in the early hours of Saturday with an apology for the absence of Mr. Cool Anthony Makondetsa due to poor health.

"I know most of you are surprised that Mr. Cool is not with us here. He has an eye problem and cannot perform,” explained Anjiru, adding: “We apologize for that, but hopefully, we will be with him in our next shows."

The anniversary show climaxed when Anjiru invited onto the stage the Managing Director of Zitherepano, Victoria Kingston, who was coincidentally celebrating her 47th birthday on the day.

"Today, we are in double celebration as Zitherepano has clocked 22 years and my sister here Kingston is also celebrating her 47th birthday,” disclosed Anjiru.

“Let us all join her in the double celebration as we appreciate the good relationship we have had with the management of Zitherepano for the past years,” he said.

Kingston thanked The Blacks for honoring the invitation and also the fans for patronizing the show as well as honoring the day’s event.

“To everyone who has patronized this show, I say: we are Zithere because of you and I urge you all to continue supporting us in every activity," said Kingston.

During the show, patrons were randomly treated to free drinks and free braai as part of the celebrations.

Zitherepano Club has, in the past 22 years, hosted international artists like Ras Trever Hall from Jamaica, Awilo Longomba from DR Congo, Banyana Bafana from Zimbabwe, Mampi from Zambia, Makhilikhili from Botswana, and General Kanene from Zambia, among others.

The Club will host Kwa George hit maker, B1, from Zambia and Skeffa Chimoto the coming Friday.