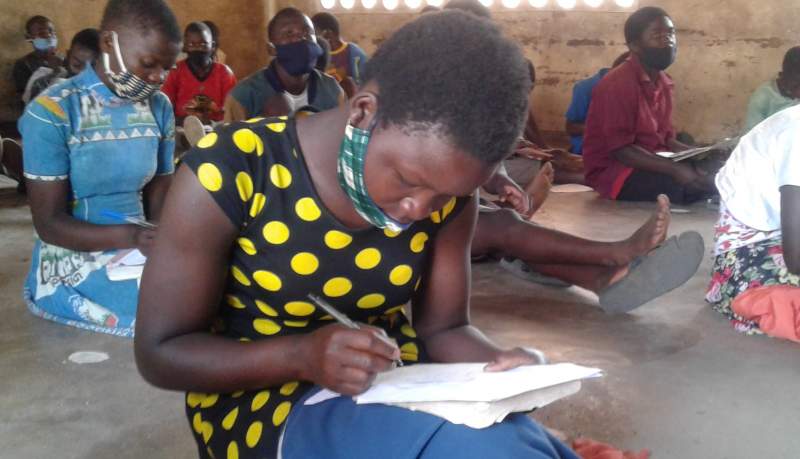 She never realized what she would like to be when she grows up until the day her dad went with her to the bank.

"We met the bank manager and admired her," said Ellen Saenda.

That was the day "I started dreaming of becoming a bank manager," said the 15 year old Standard 8 Ellen.

Ellen lives on the foot of Nansadi hills in Thyolo district in Kajawo village, southernmost part of a poverty stricken Malawi.

"I know I must work hard in Mathematics and other subjects to become a bank manager. I want to be selected to Providence Girls' Secondary School," she says.

From home, Ellen says she walks about an hour to get to her class at Nansadi Primary School in pursuing her dream of becoming a bank manager.

"It is not an easy road. I need to leave early to arrive on time," she says.

Ellen had no choice but to endure the turbulent waters standing her way to become a bank manager.

As the little dreamer pushes her way through, little did she know there was a monster standing her way ahead; the novel Corona virus.

In the course pursuing her dream, government announced schools lockdown owing to the pandemic. Ellen initially thought the closure was short-lived.

"I never thought the closure would last this long. After some months of no school, I realized my dream was being delayed.

“I would have already sat for my Primary School Leaving Certificate of Education Examination by now, and probably be in my form 1 class at secondary school," she says.

Ellen recalls life in a school lockdown was not easy to cope with.

"Spending an involuntary five month holiday was not that easy. I'm sure you have heard of how many girls got pregnant and most of them got married during this period.

"That was never their choice but circumstances might have forced them to be in that situation because they had nothing to be doing at home," Ellen said.

She says temptations never spared her during the five months she had been home.

She said "there are always boys and some men who attempted to frustrate my dream. They tried to entice me for love relationships but I didn't give in to their infatuations," she says.

Ellen says her family been supportive to her throughout the school lockdown; hence her successful stay at home.

"My parents always supported and encouraged me to use the holiday for studies. When they were not around, my brothers and sisters took my parents' role.

"I also used to learn through radio lessons that government introduced. Those lessons have helped me a lot because I am able to quickly catch up with lessons now when I am back in class," she says.

Emma Tambala, Primary Education Adivisor for Goliati Zone where Ellen's school is located says "her zone was not spared as some girls failed to report back to school; either they got pregnant or married.

"However, I am happy to say here that this school, only one learner failed to come back because she is pregnant.

“Mother Support Group will follow up with her to make sure that she comes back to school and sit for examinations," she says.

As one way of making sure that learners stay in school, a group of teachers called G-Stars from the Zone embarked on an initiative to assist the pupils with certain necessities.

The group's chairperson, Potential Kachulu, says "most girls in rural areas fail to achieve their goals because of poverty. We spend most of our time with the learners and we know how hard their lives are in the villages.

“Imagine, they cannot even afford K50 to for a school report production. Most of them end up in early marriage in search of support. We want to be reaching out to such learners in a bid to help them realize their dreams," he said.

Ministry of Health Principal Secretary Dr Charles Mwansambo said in 2020 there has been an increase in pregnancies between the ages of ten and 19 compared to the previous year.

She also urged parents to protect their children from all forms of rights violations, saying the law will take them to task for failing their responsibility.

Meanwhile, government has instructed all girls who got pregnant during the school lockdown to go back to class and sit for examinations.

It is a common phrase that future lies in the young ones. It is high time government and partners invested a lot in protecting the future, especially in the rural areas where illiteracy imposes on them various abuses.

There are a lot of young girls with sweet dreams such as Ellen’s but they cannot realize them without support and protection.