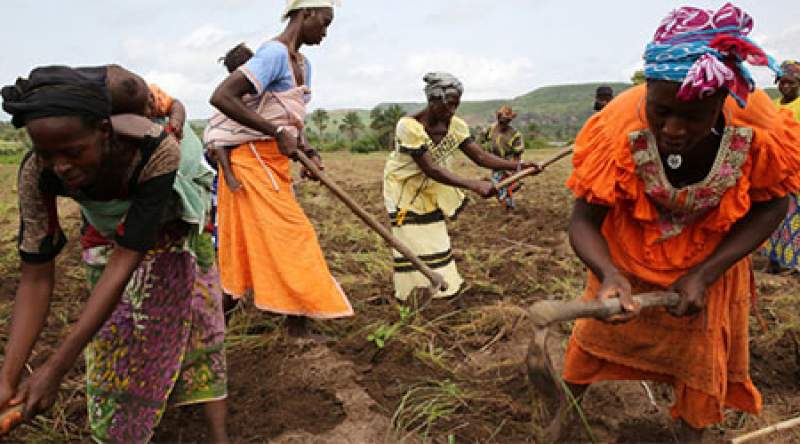 According to the ARISA 2020 report, women form the mainstay of food production and food security in many of the countries in the region - pic courtesy of UN news

COVID-19 can lock institutions' operations down, but not Women Forum of Phalombe district in Malawi’s Southern Region.

The Forum is a grouping of women in the district whose dream is to see fellow district women own and register customary land.

With COVID-19 paralyzing most of operations nationwide and globally, these women have put their foot on ground to fight for women’s rights to customary land amid the pandemic.

“From October last year to date, we have managed to resolve three cases of land grabbing involving women. The victims have repossessed their land,” says Gloria Thondolo, executive director for the Forum.

Thondolo says they follow all the recommended COVID-19 preventive measures during their operations just to make sure that no woman is victimized on land issues in these COVID-19 plagued days.

“One case involved Estere Kamwana from the area of Traditional Authority Chiwalo. She has three sons. Her relatives grabbed her land on grounds that she only has sons and therefore cannot have all that land for herself.

“Some people within her community value daughters more than sons; hence, the incident. We intervened on the matter after hearing about it,” said Thondole.

Thondolo says the Forum summoned the chiefs and relatives of the victim to discuss the matter.

“We told them that what they did was against the law. We advised them that if they do not give back the land, the matter will be taken to court. Upon hearing the word ‘court’, they gave in and surrendered the land back to Kamwana,” she said.

Thondolo said the case was resolved when the perpetrators had already started preparing the land for this year’s growing season.

Kamwana repossessed the land and she is expecting to harvest crops from it.

Monica Chinangwa is another woman who faced similar problem. She, too, has sons.

Thondolo says Chinangwa suffered land grabbing as the custom in her community values female children than the opposite. The Forum discussed with the concerned parties and the victim owned back the land.

Another case contrary to the two involves Estere Namajose from the area of Traditional Authority Nyezelera whose land, according to Thondolo, was grabbed by “unknown person.”

“Estere Namajose bought land following all the required procedures. She has all the legal documents for the land. She has been farming on the land for three years.

“Just last year, a certain man who she doesn’t know started preparing the land without proper explanation on how he owned the land.

“When we got the matter, we intervened. She produced all the documents to prove her ownership of the land.

“The man had no tangible evidence that he owned the land apart from saying that he inherited it from his ancestors. Namajose won the case and she proceeded cultivating on the land,” she said.

According to Thondolo, there are people in the district who do not know land laws “but we do try to explain to them and some seem to understand the laws now.”

Thondolo pleads to government and civil society to intensify awareness on land laws “and emphasize that women should possess and register land.”

So far, about 200 women in the district, according to Thondolo, have owned land and possess legal documents.

Programs Manager for Circle for Integrated Community Development (CICOD), Edward Thole, says "what the women are doing is commendable and needs to be encouraged.

“It should be noted here that people continue grabbing land and violate women’s rights over land even this time of COVID-19.

“With the pandemic amidst us does not mean that people have ceased to commit crimes. We need more of these women in the country.”

Thole says the Forum deserves to be a member of his Network for its commitment towards women’s right to customary land.

A 2020 report on the Impact of COVID-19 on Women’s Customary Land Rights and Livelihoods in Southern Africa by the Advancing Rights in Southern Africa (ARISA) indicates that since COVID-19 was declared a pandemic on 11 March, 2020, “many of the Southern African countries invoked their emergency, disaster management of public health laws to manage the outbreak.

The limited movement created room for various rights violation in various communities as the victims find it hard to freely move and report the abuses.

Chairperson of Human Rights Defenders Coalition – Women Chapter – Central Region, Beatrice Mateyu, says what the women in Phalombe are doing to reach out to the vulnerable women with support is a “commendable job.”

Mateyu says that “we are facing challenges during this period of COVID-19. Our movements are restricted. Even us, the institutions, we are finding it hard to move. To have women of that caliber is something that needs to be encouraged and commended.

“We are encouraging them to keep fighting for their rights. It is interesting that there are women who still advocate for their rights within their communities despite the COVID-19 pandemic.”

According to the ARISA 2020 report, women form the mainstay of food production and food security in many of the countries in the region.

“The Global Fund for Women (GFW) estimates that women produce 80% of the food in Africa but are excluded from conversations that determine agricultural policies, while discriminatory laws and practices deprive them of their land, their rights, and their livelihoods,” reads the report.