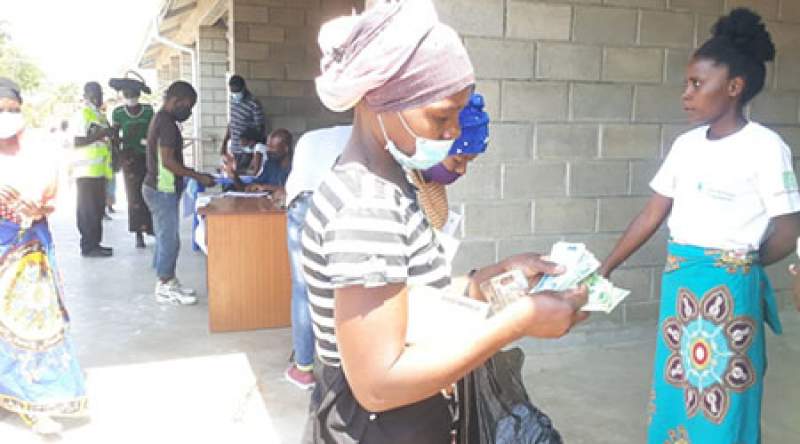 Some smallholder farmers whom effects of climate change exposed them to food insecurity are thankful to crop insurance courtesy of the World Food Program (WFP) for safeguarding their livelihoods amidst the weather shock.

The farmers who have received the support from Adaptation Fund through WFP say most of them did not pay cash premiums but worked for 14 days during off season, and other interventions included tree planting and soil conservation techniques.

50-year-old Charles Matola of Mkwekwele village in Traditional Authority Amidu in Balaka district says his maize yield dropped from about 40 bags of 50 kilograms he usually harvests to 12, which he says failed to take him and his 10-member household throughout the year.

"Dry spells and fall army worms negatively affected crop yield but thanks to WFP for a payout of K43, 200 which has enabled me buy maize for food as well as two bags of fertilizer under the government's subsidized affordable input program.

"My premium was through construction of swalleys and planting trees in our area, and all factors being equal, I will harvest enough with the inputs I have acquired through the insurance payout," said Matola.

The aftermath of dry spells and fall army worms also left a 74 year old widow Sara Magumbwa of traditional authority Matola in Balaka food insecure with nothing to feed his six grandchildren she lives with.

"My two bags of maize I harvested lasted for a short while and I had no clue on how to put the next meal on the table, until this crop insurance payout from WFP," commented Magumbwa.

WFP Malawi Country Director and representative, Paul Turnbull, during the launch of the crop insurance programme early this month of November 2021 said with the changing climate, farming can be an uncertain business in Malawi, especially for smallholder farmers.

Turnbull said: “The payouts are a springboard for farmers to continue their efforts in adapting to increased weather-related shocks and fighting food insecurity and poverty.”

Speaking at the same launch of crop insurance payout, minister of agriculture, Lobin Lowe, said scaling up crop insurance can enhance people’s capacity to anticipate and withstand shocks and mitigate their effects in the long run.

The Malawi agriculture minister said at the launch: "The Government of Malawi and a coalition of partners are empowering farming communities to manage their climate risks and reduce impacts of climate-related hazards."

This is reportedly one of the largest crop index insurance payouts ever on the African continent amounting to US$2.4 million.