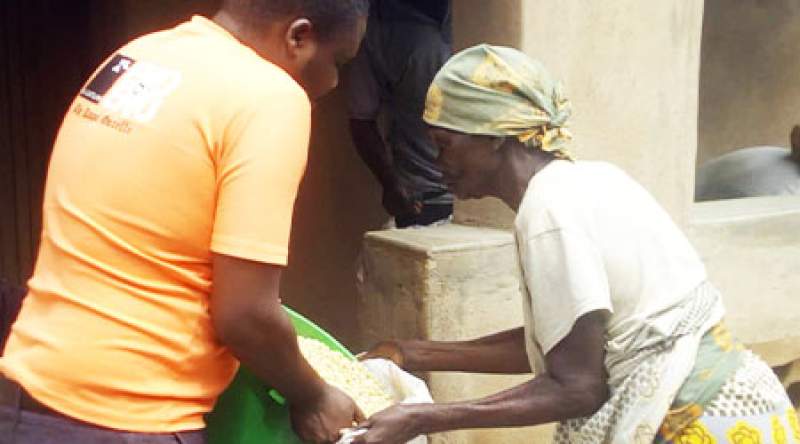 An international charitable organization, Bermuda Oversees Mission on Thursday, Friday and Saturday distributed maize rations of 20 kilograms each to 500 households in Mulanje district.

The households were from Muhiyo, Chisutu, Kane, Magaleta and Mwenekasi villages and each village had 100 families.

The organization’s Country Representative Billy Bokosi told Zodiak Online that the current lean period has just extended from last year’s lean period as most families did not harvest anything due to dry spells last farming season.

“While government is distributing relief food to some hunger-stricken families, we also thought of supporting other families with maize, realizing that government alone cannot manage to reach out to all families that do not have food,” said Bokosi.

One of the beneficiaries 79-year-old Janelle Edson from Muhiyo village told Zodiak Online that she had nothing in her house to feed her grandchildren.

“With my old age, I cannot do any piece of work and feed my grandchildren and what this organization has done today, I just say thank you and God bless you, at least we will eat for some days,” said Edson.

Village head Muhiyo said her village is prone to natural disasters such as dry spell and floods which affect crop production.

She said people were eating boiled mangoes and now that mangoes are gone, the situation is bad.

“This year, the rains and crops are good but we will lose the crop due to lack of fertilizer. As we are talking now, no one has bought the AIP fertilizer in this area. So, we are expecting another hunger this year,” said VH Muhiyo.

She thanked Bermuda Oversees Mission for the food rations and she called upon other well-wishers to emulate the gesture.

According to Bokosi, their core activities are supporting needy students with scholarships at secondary and tertiary levels, building houses for vulnerable households, and water, sanitation and hygiene.