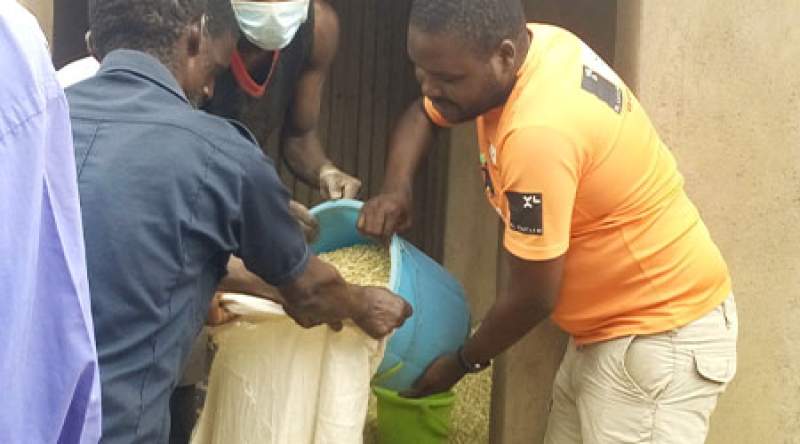 At least 500 households in Mulanje have received maize rations of 20 kilograms each courtesy of a charitable organization, Bermuda Oversees Mission.

The households are from Muhiyo, Chisutu, Kane, Magaleta and Mwenekasi villages and each village had 100 beneficiaries.

Bermuda Oversees Mission Country Representative Billy Bokosi told Zodiak Online that the organization was compelled to come up with the food relief initiative after realizing that a lot of households in the district have been hit by hunger.

He said with the current crop situation, there are fears of a prolonged hunger situation.

“Already people have been hit by hunger following last farming season’s poor harvests and looking at the crop in most fields, chances of harvesting enough food this year are very minimal,” said Bokosi.

He said there is need to join hands in feeding the hunger.

One of the food recipients Ethel Bobo a single mother of three children from Muhiyo village said the little food she harvested last year ended three months ago and currently she has nothing to feed her children.

“Right now, it is just hand to mouth and I depend on piece works to get money and buy food for my children,” said Bobo.

On her part Village head Muhiyo said her village is prone to natural disasters such as dry spell and floods and this affect crop production.

“I am very thankful to this organization for assisting my subjects with food and I call upon other well-wishers to emulate the gesture,” said VH Muhiyo.

The core activities of Bermuda Oversees Mission according to Bokosi is supporting needy students with scholarships at secondary and tertiary levels, building houses for vulnerable households and water, sanitation and hygiene.

It is funded by David Thomson, people of Bermuda and Christ Church.