I Will Not Condone Lawlessness - Chakwera 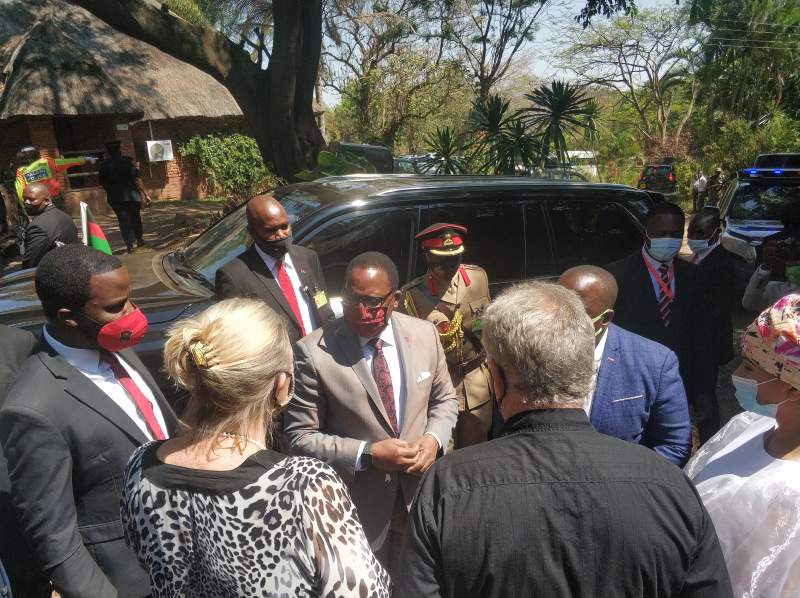 President Lazarus Chakwera says his administration will not condone lawlessness of any form warning perpetrators of violence to desist from such or face the law.

The President said this when he visited Kumbali Lodge of the Natures Gift Limited Wednesday morning following an arson attack that destroyed part of the property in the early hours of Sunday.

The statement comes at amid escalating reports of violence ranging from land wrangles affecting property as well as human rights violations.

During his visit to Kumbali lodge on Tuesday, the president reaffirmed his position to promote investment assuring the property owners of continual support.

Kumbali Lodge Director Guy Pickering however says there’s a need for concerted effort for law and order to fully find its place in the society.

“We both agreed that Sunday was a sad day for Malawi. Its sad for tourism. Its sad for investment. However, more can be done to restore law and order in the country. The President’s visit has reassured us as well as strengthened other investors too,” says Pickering.

Government spokesperson Gospel Kazako The President added that talks are currently underway among the relevant stakeholders to revisit the country’s land laws to ensure there’s harmony.

“The land laws in 2016 need to be revisited. Talks are underway to have that harmonized. Land is a serious issue. There is too much land wrangles across the country,” added Chakwera.

The President also addressed human right violations in the country for instance the stoning to death of a woman in Dedza on Saturday and the defilement of a 11-year-old girl in Chikwawa on Tuesday.

He acknowledges the growing trend which he has strongly condemned warning perpetrators that the law will take its course.

“We will not allow lawlessness. We will not let people with superstitious beliefs to endanger other people’s lives or point a finger at somebody. This nation needs a new way of thinking and doing things and all of us need to participate in that,” says the President.

Meanwhile, government spokesperson Gospel Kazako has advised Malawians to protect their land and avoid reselling promising them that that is riches.