Northern Region Police Spokesperson Superintendent Peter Kalaya says in the past two weeks incidences of lawlessness and mob justice have increased in the region as some individuals have taken the law into their own hands by blocking roads, attacking strangers and vandalizing property of innocent people accusing them of either being blood suckers or harboring such people.

The Civil Society Network on Accountability and Transparency is demanding the resignation of Mzuzu city Council chief executive and finance director for failing to perform their duties and gross mismanagement of council funds.

Written by Towera Kumwenda
Published in:News In Northern Region
Subscribe to this RSS feed
The Competition and Fair Trading Commission has given seven days to eleven pharmacy shops in Lilongwe and Blantyre to immediately cease and desist excessive pricing of sanitizers, masks and gloves as failure to do so will lead to the sanctioning of the shops.
Read more...
Tagged under:

Africa’s response to the Coronavirus Disease (COVID-19) outbreak received a boost today as the Africa Centres for Disease Control and Prevention (Africa CDC) and the Government of Ethiopia received a consignment of medical equipment from the Jack Ma and Alibaba Foundations. 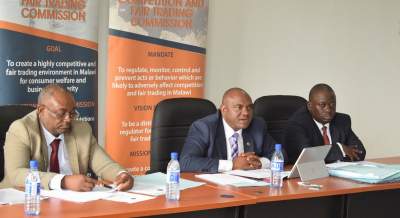 The Competition and Fair Trading Commission has warned traders and companies that are taking advantage of the corona virus to promote certain products as cure and treatment for the virus.

Flood survivors from Kakuyu farming Island in Dwangwa - Nkhotakota district are reportedly selling their relief items to vendors despite being in depserate need of the very same.

Property has been vandalized and destroyed around Jenda and Embangweni Trade Centres by angry members of the communities who allege that some people are in the area ‘sucking blood’ of citizens through magic for reasons bordering on myths.

Malawi is still grappling with banana bunchy top, a viral disease that has attacks bananas for close to three years now with solutions nowhere in sight.

MEC Commissioner Nkosi Yet to Step Down After Pledge

Commissioner Mary Nkosi of the Malawi Electoral Commission MEC is yet to step down from her position despite a public pledge to do so before the Public Appointments Committee, PAC of parliament.

Chief Justice Yet to Give Practice Nod to Hired MEC Lawyers

Chief Justice Andrew Nyirenda has yet to grant permission to South African lawyers who are in the country at the invitation of the Malawi Electoral Commission-MEC- to represent it in the appeal against the Presidential election case.

Violence Against the Elderly Still on the Rise in Chitipa