Constitution is Voice of the People – Mordecai Msisha 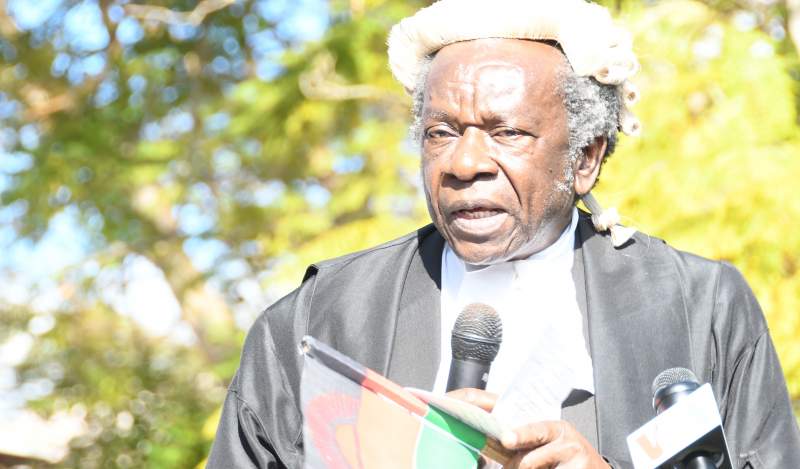 Listen to the people; read the Constitution - Msisha - pic by Fatsani Gunya

Senior Counsel Mordecai Msisha took his time during the lawyers march dubbed “Hands of the Judiciary” on Wednesday in Blantyre to tell the people the supremacy of the Constitution.

Clad in their court regalia, lawyers in Malawi took to the country’s streets to protest a forceful retirement of the Chief Justice Andrew Nyirenda orchestrated by the Executive, saying they are defending the Constitution.

“The Constitution is not a paper; let alone a dead piece of paper. It is a will of the people. It is the people speaking.

“Before doing anything, ask yourself if what you are doing is right and in accordance to the law. Listen to the people by reading the Constitution,” he said.

The lawyers said the Executive should recognize and respect the principle of separation of powers and defend the Constitution.

One of the seasoned lawyers who led the demonstration, John Gift Mwakhwawa, said that “we stand in solidarity of our Judiciary with great pride.

“We stand for the principle of separation of powers and continued structural, operational and administrative autonomy of the Judiciary. This is important for checks, balances and governmental efficiency and effectiveness. Malawi needs those for the progressive well-being of its people.”

Another lawyer, John Suzi Banda, said there was no need for them to deliver a petition to the court because “we are convinced that there is no need for one.

“The Executive knows pretty well that Judiciary is a co-equal but independent organ of state. Everyone who has ever bothered to read our Constitution will know that the tenure of our judicial officers is secured.

“What has been happening in the past few months is not borne out of ignorance but rather a wilful and malicious desire to undermine the Judiciary and other state institutions that are necessary for good governance.”

Banda added that “in these times of great tribulation for the profession we love and for the judicial organ of state, there can be no sitting on the face. You are either on the side of the Constitution and rule of law or you stand with the gang on the other side.”

The lawyers together with others in solidarity marched from the Queen Elizabeth Central Hospital roundabout to the high court where Mwakhwawa briefed Assistant Registrar, Edna Bodole contents in the petition.