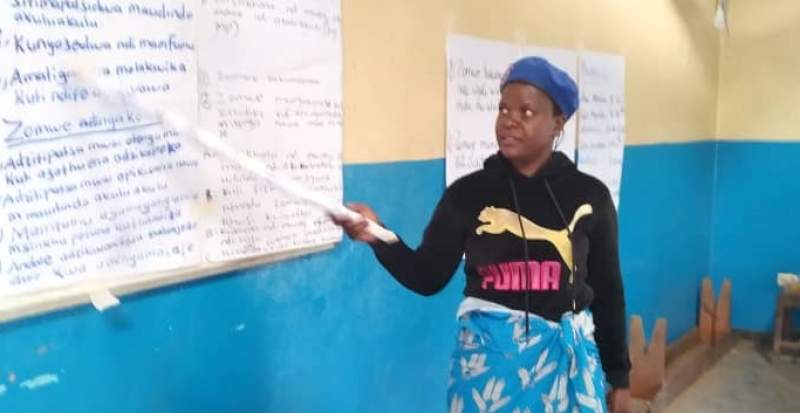 Youth from DPP pointing at challenges they face in trying to contact their masters. - pic by Steve Kalungwe

In the just ended Fresh Presidential Election and in the whole genesis of the journey, the youth were at the centre stage, advocating for a wind of change which at last blew across the country.

But to the surprise of a women's rights group, Women's Legal Resources Centre (WOLREC) most of the youth who took part in the change have not been given space to voice their political inspirations, a development which the organisations Project Officer Evans Phiri describes as retrogressive.

"Most of these youths feel abandoned as they no longer have space to come into contact with the leaders who once were rubbing shoulders with three weeks ago, this is frustrating to them," Phiri said.

Phiri said, from their assessment from five visible political parties in Neno, namely, UTM, MCP, DPP, UDF and PPM, youths feel they do not actively take part in decision making processes as they are just fed with already cooked party ideologies.

"Youths are sidelined when it comes to decision making, they do not have access to dialogue with those holding higher positions like regional governors, MPs and even presidents," Phiri lament.

WOLREC, which is implementing a project called Young Women in Active Politics, with funding from EU, DCA and DIPD seeks to improve young people's activeness in politics through having key positions in their respective parties as they represent a majority of Malawi's population.

One youth from UTM party, Lemon Thom said they are being infringed upon by being used by political leaders during campaign and later dumped as they can't access their masters anymore.

This sentiment was equally shared by an MCP member Philip Mayere who said "there is a need for political masters to still engage the youth even after elections saying they do have a lot to contribute to the country’s political development through their fresh ideas."