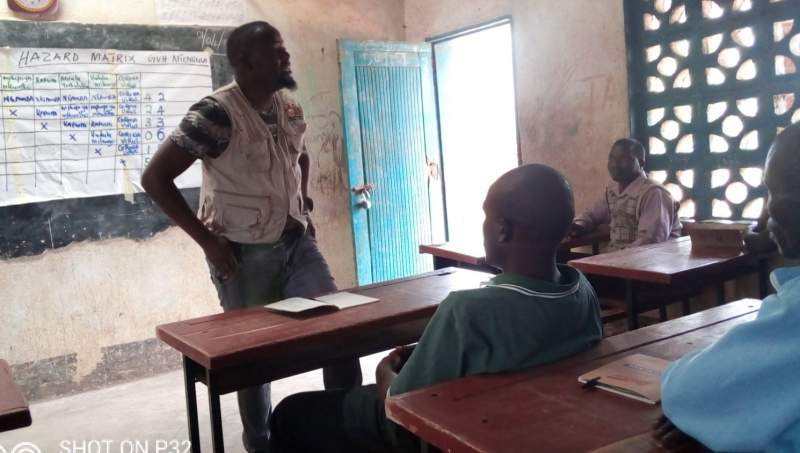 The training in progress - pic by Steve Kalungwe

In a bid to minimize climatic shocks that people face during disasters, especially for those in rural and hard to reach areas, Neno District Disaster Desk Office has drilled Village Civil Protection Committees (VCPC'S) on how to forecast a disaster through signs and symptoms and mitigate the impact.

Neno District Disaster Desk Officer, Alick Milanzi, told Zodiak that there is a need for the Committees to have firsthand knowledge on weather prediction so that they help in minimizing the impact of natural disasters that occur in their respective areas.

"Like here in Traditional Authority Mlauli, Group Village Headman Felemu, people face dry spells almost every year, and as a way of mitigation, we encourage them to plant early maturing crops, practice animal farming and irrigation using the nearby Shire river so that they at least beat hunger," said Milanzi.

Milanzi added that his office is to engage the ministry of agriculture and other partners like Save the Children, IRISH AID and others to come to the rescue of Felemu people with irrigation system equipment as they singled out that government is sidelining them in the program of constructing dams for irrigation in areas (districts) that face perennial hunger due to dry spells among other factors.

In his remarks, Patrick Kamwana chairperson of Village Civil Protection Committee of group village headman Felemu, said the major sign of dry spell they easily identify is the North Star, commonly known as" Nthanda" and strong winds in the months of September and December which results in poor rainfall.

"When we see this, we go round the village sensitising people to build strong houses, plant eary maturing crops. This whole thing of dry spells is due to wanton cutting down of tress for charcoal businesse and we are currently discouraging this malpractice while asking government to assist us with irrigation system equipments as an alternative to charcoal," said Kamwana.

Meanwhile Village Civil Protection Committee of Senior Chief Symon under group village headman Mtengula has identified Covid19 as a major disaster that has befallen their area and is encouraging people to adhere to all preventive measures put by the ministry of health.