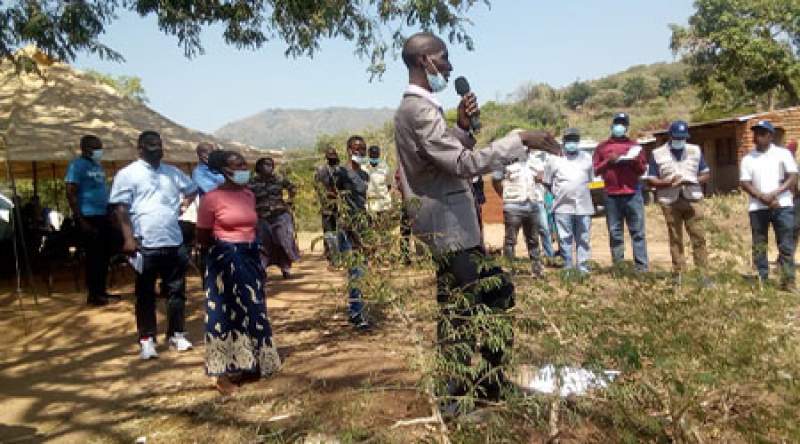 A senior official responsible for Agriculture Environment and Natural Resources in Nsanje district, has decried failure by most farmers in the district to adopt soil and water conservation technologies.

Jameson Lichapa, a Chief Agriculture and Environment and Natural Resource Officer under Nsanje District Agriculture Office (DADO) told Zodiak on Thursday, less than 60 percent of the district's farmers have adopted the technologies.

Lichapa raised the concern at Chididi in the area of Senior Chief Malemia during Soil and Water Conservation launch.

He noted that this is compromising efforts to improve soil quality and moisture retention thus affecting agricultural production.

"We are not at a good pace in terms of adoption of these technologies. We should have been way ahead in light of the climate change. We were expecting that most farmers would be adopting such technologies to maximize their farming endeavors.

"You see farmers choosing one leaving others, " lamented Lichapa.

He believes intensifying sensitisations and launches could help to reverse the trend.

"Our target is to ensure 100 percent, that is our preference. But the sad part is we still have a challenge. Here for example you would see other fields having ridges without following any of the technologies. We need to improve," said Lichapa.

He added; "for agriculture to flourish we need good soil and water. Good water sources are also critical in rearing livestock."

According to Lichapa, the launch was aimed at promoting soil quality and moisture retention, amid issues of climate change such as floods and droughts.

"We wanted traditional leaders and farmers from other areas to appreciate what farmers here are showcasing. We have seen swales, they are planting trees and they are doing conservation agriculture. These are some of the technologies that we are promoting," said Lichapa.

Senior Chief Malemia of the district has underscored the need for farmers and the district agriculture office to sustain the same.

"We are all aware that conserving soils is very important. We had no problems with our rivers, trees and vegetation here, but by passing of time, the rivers have dried up some are drying up, our soils have been silted.

"We need to sit down, bang our heads together especially with the younger generation. We need to instill in them a sense of taking care of the environment," said Chief Malemia.

He further commended Senior Group Mpangira under his area for taking the lead in coming up with measures to sustain the environment.

"Others should emulate, nobody is going to come from there to protect the environment," said Chief Malemia.

Jenipher Misoya of Mpangira 2 under group village head Mpangira, told Zodiak since she started applying manure in her field, things have not been the same.

"We make manure of four types which we apply in our fields. The soil quality has greatly improved," explained Misoya.

She dared others farmers to emulate saying this can help them realize bumper yields as not all of them are economically safe to purchase fertilizer.