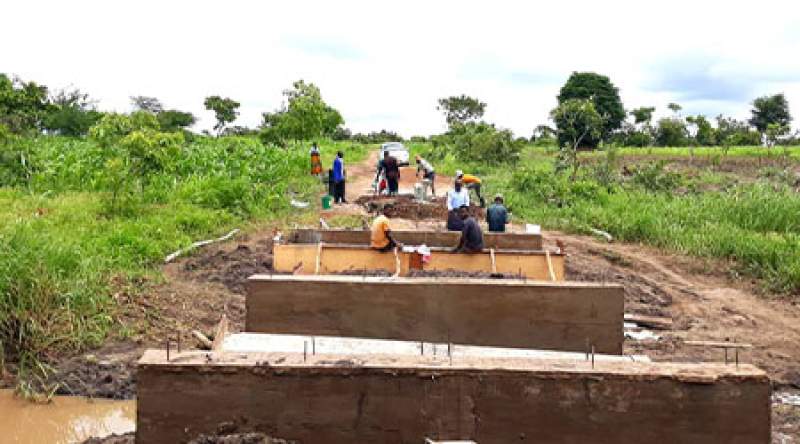 The construction work is almost through - pic by Moses Masiye

Some communities in Zomba, Chikwawa, Machinga and Balaka districts are boasting about utilizing their skill to demand developments from duty bearers according to their priorities, ousting imposition.

The communities say a development arm of the Catholic Church (Catholic Development Commission - CADECOM), enlightened them through its climate challenge program Malawi project, on their rights and capacity to engage duty bearers on their social needs.

They say there are some social needs which the communities cannot manage on their own and these are the ones they engage responsible duty bearers.

In Zomba Chisi constituency for example, communities of traditional authority Mwambo have on their own managed to control water from Phalombe river that has been washing away their crops and houses downstream for several years.

“We are now able to harvest our crops as we mobilized ourselves to construct a water way blocking run off water with sand-filled sacks and we are now living peacefully as the river has taken its normal course,” said Enifa Malembo ch,airperson for advocacy committee of traditional authority Mwambo.

She says knowing that they could not manage to construct a bridge on Nsukamatumbo where people were disconnected from several social services during the rainy season, they have been pestering their member of parliament for Zomba –Chisi constituency Mark Botomani on several occasions, and he has finally assisted with funds from the constituency development fund.

The construction work is almost through.

The community of sub traditional authority Matola in Balaka has a similar story to tell.

Come rainy season, they say it was impossible to access several social services as they could not cross Kakhwisa and Mcheza rivers.

Advocacy chairperson for Sub TA Matola Darlington Magola says they have been on the neck of their parliamentarian for Balaka north constituency Anthony Tony Ngalande for some time asking him to disregard other developments and give them bridges on the two rivers.

Magola says: - “We are glad that our MP has finally considered our request and by the end of this month of February, we will cross on both bridges according to progress and assurance from contractors on site.”

According to Ngalande, all these bridges have been possible this time around with funds from the constituency development fund-CDF.

“Kakhwisa will cost 9, 066, 000 Malawi kwacha while Mcheza bridge is to the tune of 5.5 million kwacha, all from the CDF,” said Ngalande.

Program coordinator for CADECOM national office Aaron Kandiwo- Mtaya says it is gratifying to see that the communities are still holding duty bearers accountable as well as shouldering responsibility despite the project phasing out.

“This was what wanted when we empowered the communities during implementation of the project and we would like to applaud parliamentarians Ngalande and Botomani for acting accordingly to demands of their constituents, even in our absence,” said Mtaya.

Scottish government through SCIAF and Trocaire supported the initiative that was implemented in Zomba, Chikwawa, Machinga and Balaka districts.